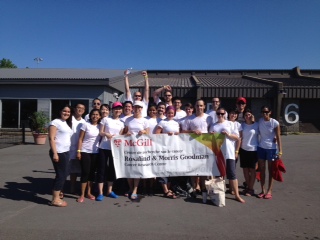 On  July 21-22, 2012,  The GCRC competed at the Olympic Basin of Parc Jean Drapeau in the Dragon Boat Race Festival.  The GCRC  not only winners in ground-breaking cancer research, but also demonstrated that they can compete alongside the best dragon boat racers, placing 2nd in their Division, and awarded two trophies overall.

Jason Turpin, a PhD student at McGill University was the brainchild of the GCRC’s team participation in 2007, and the rest, as we say, is history. This year’s team, Two-Hit Hypothesis with Co-Captains Katherine Stewart and Mathieu Flamand at the helm, both Masters students in the labs of the Research Centre, confessed that the involvement demands a substantial time commitment after their already full days at work. However, the benefits of such involvement make that commitment worth it. Katherine says, “It’s a great way to make friends, bonds, strengthen a sense of identity, and exercise”.

The Montréal International Dragon Boat Race Festival is an international event that attracts over 50,000 spectators and 200 racing teams. Over 20 students from the Centre participated in the race, displaying the same energy that they put into their innovative research in a very different domain.

Placing 2nd in the division concluded the team’s Two-hit hypothesis and resulted in a memorable day had by all.