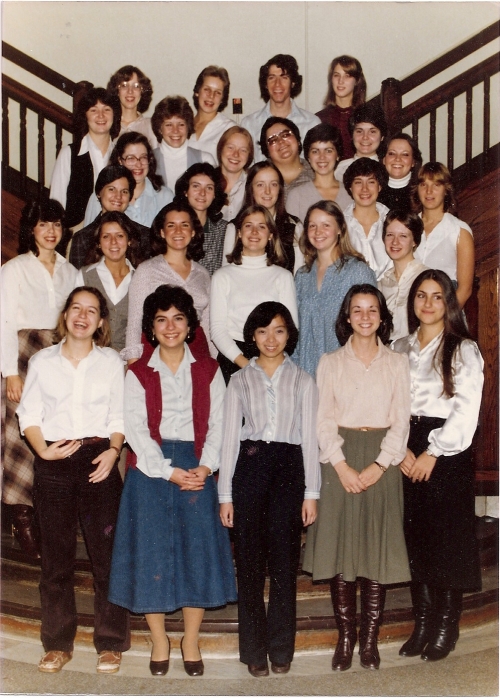 This seems a fitting time to share a simple tale of the power of communication. It was nonverbal communication that I recall being stressed during our nursing education during the days the faculty were devising the McGill Model of Nursing. Our first exposure to patients in 1977 was to approach people in the out-patient clinics at the Royal Victoria Hospital, initiate conversations with them, about why they were there, and in that short time earn their trust so that they might allow us to accompany them in to their time with the physician. This taught us much about the various forms of communication people use, and that we as nurses used as well. Many clinical reports would be written analyzing what each person we met said or did and what we said or did in response as we learned a greater awareness of the power in all forms of communication.

My first job after graduation in 1980 was in the referral hospital for northern Newfoundland and Labrador in St Anthony’s. The Grand Banks off Newfoundland was a sought after site for the fisheries industry by countries all over the world. Working on the Obstetrics and Gynecology ward was a great learning experience. I was the first Canadian nurse with a degree among many British midwives so I had to win their trust and approval. One day a group of giggling nurse/midwives on my shift told me that I had been selected to go and talk to a woman who was not my patient. I was to find out if she had had a bowel movement post-surgery. This patient had been flown to the hospital by a helicopter medivac, from a Russian fishing trawler, for severe abdominal pain – a ruptured ectopic pregnancy was the final diagnosis. She was now three or four days post op and after extensive exploratory abdominal surgery they needed to know if she had had a bowel movement. As I started down the hallway they all laughed saying they think she only speaks Russian. Hmm what to do as I could converse in two languages only?

Armed with my piece of paper and pen I went into the room. Greeting the woman I boldly proceeded to act out charades, with some sound effects, and drew drawings as I went through the whole process of defecation. The lady was totally baffled watching this nurse gesturing to the bathroom, squatting and grimacing while drawing on her paper, but as I repeated the charades with my drawings her eyes suddenly widened and she started to laugh. Holding a pillow to her abdomen to lessen her pain I too laughed with relief as she realised what I was asking. We had a great hug and after that she would always chuckle when she saw me. Over the days prior to discharge I was always assigned to her and we forged a friendship learning about each other, her family, her work on the fishing trawler and home country of Poland. Along with our ongoing charades we would draw all over the paper towels by her sink; maps, stick figures, fish, boats, food and more. I taught her English words and she taught me Polish words while I concentrated on her specific discharge teaching needs. My collegues always remarked with wonder that I could find out so much from her but not speak the same language.

Communication in all its forms is so vital in Nursing. It is the strength at the heart of all that nurses do and all the different forms of communication must never be ignored or forgotten. I had the privilege of communicating with patients, their families, nursing students, physicians and other health professionals during my varied nursing career in Canada’s Arctic, Scotland, the US and other parts of Canada. Working with people has been so personally rewarding, but most of all fun. Without speaking words we share and learn so very much.

Story of Strength by: