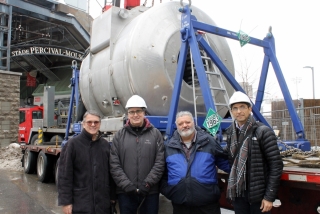 Scientists will see the human nervous system in microscopic detail thanks to the installation of Canada’s first 7-Tesla whole-body magnetic resonance imaging (MRI) scanner on Feb. 5.

The new MRI scanner is capable of taking high-resolution images at pixel dimensions measured in tenths of a millimetre. The unit tesla refers to the power of the MRI’s magnet. Images from the more common 3-Tesla MRIs become extremely grainy at less than one millimeter, making the 7T considerably more powerful.

The introduction of the whole-body 7T MRI to The Neuro (Montreal Neurological Institute and Hospital) of McGill University will give researchers an unprecedented window into the effects of neurological disease not just on the brain, but the entire human nervous system. Some neurological and metabolic disorders affect the muscles and spine as well as the brain, and the new system will provide enhanced opportunities for studying such conditions throughout the body.

“In 1985 The Neuro was the first institution in Canada to install an MRI’” says Dr. Guy Rouleau, Director of The Neuro. “This latest addition to our brain imaging capabilities maintains our status as a world leader in the field and more importantly will allow our scientists to uncover the fundamental knowledge of the brain we need to develop better treatments that benefit patients with neurological disease.”

Planning for the 7T MRI began in 2008 during the design phase of The Neuro’s new North Wing, which was constructed with an MRI suite capable of bearing the 70-tonne combined weight of the MRI scanner and its shielding. In 2015, a group of The Neuro’s researchers led by Amir Shmuel received an $18.8M grant from the Canada Foundation for Innovation, the Quebec Government’s Ministry of Economy and Innovation, and corporate partners such as the MRI manufacturer, Siemens Canada.

Housed at The Neuro’s McConnell Brain Imaging Centre (BIC), the 7T will support multiple provincial, national and international projects and collaborations, including McGill’s “Healthy Brains for Healthy Lives” initiative, which seeks to link neurological health with overall wellbeing. Data collected by the 7T will be shared with the greater scientific community through The Neuro’s open science policy.

“The 7 Tesla scanner makes it possible to image the structure and activity of the building blocks of the brain, termed brain columns and layers. Therefore, it allows a significant leap in our capacity to study the healthy brain and its malfunction in disease.” – Amir Shmuel, researcher at The Neuro and expert in ultra-high field brain imaging.

“7T MRI has very recently been approved for clinical diagnosis in the United States and Canada. Research and development conducted at The Neuro will have an even greater impact thanks to the anticipated clinical adoption of such systems in the future.” – Richard Hoge, researcher and Director of the MRI Unit at The Neuro

“This is the first of several major acquisitions planned for The Neuro over the next few years that will increase our capacity to support neuroscience research with cutting-edge brain imaging systems.” – Julien Doyon, Director of the McConnell Brain Imaging Centre.

The Neuro – The Montreal Neurological Institute and Hospital – is a world-leading destination for brain research and advanced patient care. Since its founding in 1934 by renowned neurosurgeon Dr. Wilder Penfield, The Neuro has grown to be the largest specialized neuroscience research and clinical center in Canada, and one of the largest in the world. The seamless integration of research, patient care, and training of the world’s top minds make The Neuro uniquely positioned to have a significant impact on the understanding and treatment of nervous system disorders. In 2016, The Neuro became the first institute in the world to fully embrace the Open Science philosophy, creating the Tanenbaum Open Science Institute. The Montreal Neurological Institute is a McGill University research and teaching institute. The Montreal Neurological Hospital is part of the Neuroscience Mission of the McGill University Health Centre.