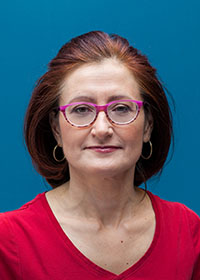 My research focuses on outcomes in rheumatic diseases, including morbidity, mortality, environmental factors and the impact of conditions such as systemic lupus erythematosus (SLE) and rheumatoid arthritis (RA). Since participating in the USBJI Young Investigator Initiative (YII), I have successfully obtained funds through various peer-reviewed funding sources, including the National Institutes of Health (NIH), the Department of Defense (DoD) and the Canadian Institutes of Health Research (CIHR). My peer-reviewed grants total over $7M as nominated principal investigator (PI) with another $9M as co-PI, and I have published more than 280 papers. I attribute much of the success I am having on what I learned through the YII, and particularly the foundation it provided to my career as a researcher. It was indeed a stepping stone that aided me greatly in achieving my goal of a career as an independent researcher, working to improve outcomes for people with systemic autoimmune rheumatic diseases.

My work on cancer risk in autoimmune rheumatic diseases has been conducted in concert with the Systemic Lupus International Collaborating Clinics (SLICC, currently directed by Ann E. Clarke) and Canadian Network for Improved Outcomes in SLE (CaNIOS, founded by Paul R. Fortin and currently directed by Christine Peschken) research groups. Funded by the Canadian Institutes of Health Research (CIHR), NIH, and other agencies, these national and international networks have contributed data on more than 16,000 SLE patients, representing the largest ever cohort assembled. In 2010, I turned my focus to cancer in pediatric-onset rheumatic disease, which allowed me to tackle an ‘unknown frontier”. With over 20 pediatric rheumatology investigators across North America, we produced novel data on cancer risk in this vulnerable population. In 2012, I led an international meeting on cancer risk in autoimmune diseases, bringing together world leaders from rheumatology, immunology, oncology, epidemiology, and the basic sciences, from all across the globe. This fostered exciting new collaborations, particularly with Dr. James E. Hansen, an oncologist and basic scientist from Yale. Together, we are conducting studies of antibodies inherent in SLE, which may have a protective effect on breast cancer.

Over time I developed another great interest, this time in examining the relationship between the environment and rheumatic diseases. Funded by the CIHR, I have published several studies on this topic. In 2016, I was granted US Department of Defense funding to examine DNA methylation, air pollution, and RA risk, and in 2018 I received a five-year CIHR project grant to study the effects of air pollution on systemic autoimmune rheumatic disease risk. I am affiliated with the McGill Environmental Epidemiology Research Group, a network with expertise in the environmental sciences, as well as being a member of the Canadian Urban Environmental Health Research Consortium.

As co-principal investigator (with Michal Abrahamowicz, Louise Pilote, and others) I helped to develop the Canadian Network for Advanced Interdisciplinary Methods (CAN-AIM) for comparative effectiveness research to provide new, accurate data on long-term, real-world outcomes for the Drug Safety and Effectiveness Network (DSEN), a joint initiative between the CIHR and Health Canada. http://canaim.ca

I led the team in assessing RA drug safety and effectiveness. I continue to work closely with Health Canada and other knowledge users to respond to queries that highlight priority areas in studying drug therapies, including drugs for RA, ankylosing spondylitis and other rheumatic diseases. I was recently awarded CIHR funds to support a 5-year project comparing the safety effectiveness of biosimilar drugs to the originator biologic drugs.  Recently I took on a new position as the adult clinical director for the creation of a multi-institutional biologics registry. This will help support the McGill University Hospital Centre’s new ‘Centres of Excellence for Systemic Auto-immune Diseases and Rheumatology’ (led by Dr. Christian A. Pineau) and is an innovative way to work with many stakeholders to improve outcomes in rheumatic disease.

Time and time again, I have seen the value of collaborative networks, and have been closely involved in establishing several, including the Canadian Rheumatology Administrative Data (CANRAD) Network (co-directed by Diane Lacaille and Lisa Lix), which focuses on optimal use of administrative data for research and surveillance. As a group of researchers, clinicians, policy makers, and patient advocates, CANRAD has published national guidelines, and holds webinars and face-to-face meetings to increase knowledge dissemination and build Canadian capacity in research and surveillance.  My experience studying rheumatic disease prevalence, patterns, and co-morbidity, using provincial administrative data from across Canada, led to my participation in the Public Health Agency of Canada (PHAC) Arthritis Validation Working Group. For over 10 years, PHAC has created detailed algorithms for rheumatic disease surveillance in Canada, and I have served as an advisor to the Canadian Institute for Health Information to help them refine case definitions for their own research and surveillance activities.

In summary, I am very grateful for the opportunities I have been given; I truly feel blessed. Great mentorship is one of the main reasons I have been able to engage in a career as an independent researcher. I hope that at the end of this career, I can look back and see real improvement in outcomes for people with rheumatic disease.