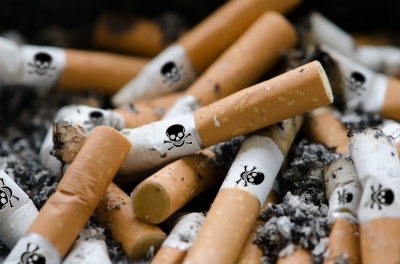 Despite obvious motivation for quitting, 2/3 of patients will resume smoking within twelve months

A new study reveals that two-thirds of middle aged smokers who have been hospitalized for acute myocardial infarction resume smoking within twelve months, despite being treated with bupropion (sold as Zyban), which is prescribed to help those trying to quit because of its demonstrated capacity to reduce nicotine cravings and withdrawal symptoms without increasing heart rate or blood pressure the way nicotine replacement therapies will. This surprising finding, revealed in a study led by Dr. Mark Eisenberg, a cardiologist and epidemiologist at the Lady Davis Institute at the Jewish General Hospital, is published in the latest edition of the Journal of the American College of Cardiology.

“Conventional wisdom was that suffering a heart attack served as a significant wake-up call inspiring smokers to quit. But Dr. Eisenberg is quick to add, “nobody had ever studied this population a year after the event. In fact, it may be that even more than two-thirds return to smoking, because those who agreed to participate in our study were more motivated than those who didn’t want to be involved in a cessation trial.”

The study used a randomized sample of 392 patients, whose median age was 54 and who smoked an average of 23 cigarettes per day. Six months after beginning treatment, smoking abstinence was 39% in the bupropion group and 33% in the placebo group. At twelve months, the prevailing abstinence rates were 37% and 32%, respectively. One positive outcome among the persistent smokers was a dramatic reduction in their daily cigarette consumption to an average of eight per day, with no difference between groups.

“Notwithstanding the relapse rate we observed, the patients’ significant decrease in consumption suggests that a subset could be effectively re-targeted for smoking cessation therapy,” Dr. Eisenberg pointed out. “While any reduction is positive, the health benefits of complete abstinence are significantly higher than even modest smoking. However, there is no escaping the power of a nicotine addiction combined with the social and behavioural aspects of smoking. It is very tough to quit and there is no magic bullet, in the form of a pill, that will make quitting easy.”

Funding for the study was provided by the Canadian Institutes of Health Research (CIHR) and the Heart and Stroke Foundation of Quebec (HSFQ).

The study, “Bupropion for Smoking Cessation in Patients Hospitalized with Acute Myocardial Infarction” by Dr. Mark Eisenberg et al can be found in the Journal of the American College of Cardiology