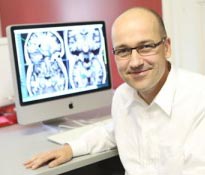 Like so many of us, McGill University researcher Jens Pruessner wants to believe that dementia doesn’t have to be inevitable.

So he has come up with a unique way to try to prove it.

As director of the McGill Centre for Studies in Aging, he recently launched the Prevention of Neurological Diseases in Everyone at Risk (PONDER) project, which will offer free cognitive training to the public while creating an extensive database of longitudinal cognitive assessments which he hopes will give researchers a greater understanding of the trajectory of neurodegenerative diseases.

But he doesn’t want participants to worry about trying to boost their brain power, so the online cognitive training is a series of fun games and puzzles that Pruessner is hoping will keep people coming back to the Web repeatedly — for decades.

Read the full story in The Gazette.