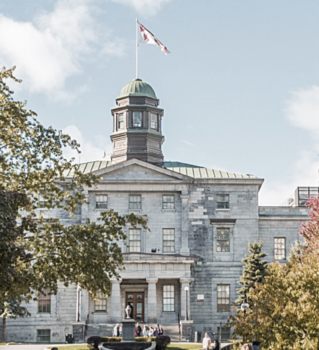 Campaign will mobilize thousands of alumni and donors around the world in support of McGill’s mission of teaching, research and service to society

McGill University today unveiled a $2-billion fundraising campaign designed to propel McGill into its third century by boosting resources for financial aid and scholarships, equipping students with the skills they need to become “future-ready” global leaders, and supporting research and innovation in some of the most pressing societal challenges.

Made by McGill: the Campaign for Our Third Century is the most ambitious fundraising drive in McGill’s history. It comes as the University prepares to mark its 200th anniversary in 2021.

“McGill is moving into its third century against a worldwide backdrop of major social, environmental and technological change,” said Principal and Vice-Chancellor Suzanne Fortier. “This demands a profound redefinition of what a global university looks like in the 21st century: one that McGill is well positioned to lead with the support of our worldwide community of alumni, friends and donors.”

Funds raised during the Campaign will be directed to four key areas:

– $600 million towards increased funding for bursaries and scholarships and other means of student support, with the goal of ensuring that no qualified student is denied a McGill education for financial reasons.

– $750 million towards research, accelerating discovery and breakthroughs in strategic areas where McGill is poised to make the most significant contributions, including neuroscience, environmental sustainability, the social impacts of artificial intelligence and data science, and infection and human immune threats.

– $100 million towards increasing innovation across faculties through seed funding, training, and mentoring from graduates and industry partners, as well as support for early-stage innovation designed to close the gap between research, discovery and proof of concept, in service of bringing new ideas and discoveries to market more quickly.

In addition to these four campaign priorities, another $300 million will be earmarked for capital projects to provide new or expanded facilities for students, faculty and for research projects.

About Made by McGill: the Campaign for Our Third Century

The campaign will be co-chaired by three accomplished McGill graduates: G. Garvin Brown IV, Chair of the Board of Brown-Forman; Claude Généreux, Executive Vice-President of Power Corporation of Canada and of Power Financial Corporation; and Marcia Moffat, Managing Director – Country Head of Canada, BlackRock.

“While meeting the financial goal is important, what is significant to its success will be to increase engagement among McGill alumni worldwide,” said Moffat. “We need more members of the University’s community to pay it forward, at whatever level is comfortable for them. Every gift matters, and if more people give what they can and experience that sense of connection to McGill, then I feel I will have made an impact.”

Honorary Campaign Chair is John McCall MacBain, Founder and former President and CEO of Trader Classified Media, a McGill graduate and noted philanthropist. Earlier this year, John and Marcy McCall MacBain made a $200-million donation – the single-largest gift in Canadian history – to launch the McCall MacBain Scholarship program at McGill.

“McGill has been and will continue to be at the frontier of creating knowledge and developing the leaders of our world. As an alumnus who benefitted from McGill, as a believer in the importance of public education at the highest level of quality, and as a major donor to scholarships at McGill, I volunteered to help encourage others to reach higher so that together, we can continue to develop this unique institution,” said McCall MacBain.

On the threshold of McGill’s bicentennial in 2021

“The launch of our Campaign, and the upcoming celebrations marking McGill’s 200th anniversary, afford us with timely opportunities to not only raise much-needed funds for McGill students and researchers, but to deepen our connections with our alumni, friends, parents and volunteers here in Montreal, across Canada and around the world,” added Marc Weinstein, McGill’s Vice Principal (University Advancement). “It is through the collective efforts of this entire community of supporters that we will celebrate McGill’s achievements as a world-class University and set it up for even greater successes in its third century.”

The campaign kicked off on McGill’s downtown campus during the University’s annual Homecoming Celebration Weekend and featured a McGill Village with an exposition showcasing some of the innovative research projects taking place at the University.

Founded in Montreal, Quebec, in 1821, McGill is a leading Canadian post-secondary institution. It has two campuses, 11 faculties, 13 professional schools, 300 programs of study and over 40,000 students, including more than 10,400 graduate students. McGill attracts students from over 150 countries around the world, its 12,500 international students making up 30% per cent of the student body. Over half of McGill students claim a first language other than English, including approximately 20% of our students who say French is their mother tongue.

For more information on Made by McGill: the Campaign for Our Third Century, visit giving.mcgill.ca