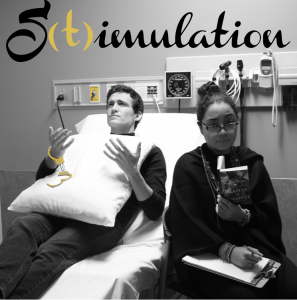 On March 19 and 20, students from the Faculty of Medicine at McGill University will bring S(t)imulation,a creative foray into the world of sex, people and ideas, to Theatre Sainte Catherine (264 Rue Sainte-Catherine Est). S(t)imulation is a collective theatre piece created and performed by McGill medical students that offers a deeply human perspective on sex, sexuality and the power of ideas to mobilize or divide us.

“Medical school can be overwhelming. There is a vast quantity of material to cover and there’s a whirlwind of charged human interaction to navigate,” says Mary Koziol a second-year medical student at McGill and the Producer of S(t)imulation.  “As students, we need to be able to process and unpack these experiences. We need to be able to take stock of our own perceptions, recognize our own reactions, and acknowledge underlying emotions. Writing this play as a collective, we have committed to an intentional self-discovery; an exploration of our own values and norms in the often sensitive realm of sexuality. The result, I think, is an increased level of confidence in helping patients navigate their own experiences.”

“This has been an incredible experience. I wholeheartedly believe that theatre can encourage healthy, open and productive discourse over important social issues such as sex, sexuality and sexual health,” says Erin Lindsay, a theatre professional from Montreal who is serving as Director and Facilitator for S(t)imulation.  “It has been such a privilege to work with people who are so creative, so genuine and so completely invested in the future of Canadian health and well-being. It is my hope that this play will generate some form of conversation. I think stories are important and I am so fortunate to have been able to work on collecting and presenting them for this project.”

S(t)imulation is a series of stylized vignettes on the theme of sex and sexuality produced by second-year McGill medical student Valerie Henderson, produced and facilitated by Mary Koziol and directed and facilitated by Erin Lindsay. The piece sprung out of a series of collective workshops facilitated by Mary Koziol and Erin Lindsay. Poems, prose anecdotes, songs and monologues were submitted by McGill medical students. These pieces were then stitched into a final script that encourages an open dialogue around often stigmatized or taboo subjects relating to sex and sexuality.

S(t)imulation will play at Theatre Sainte Catherine located at 264 Sainte-Catherine Est from 3-4:30 p.m. on March 19 and 20. There will be a talk back after each show.

Tickets are $11 and can be purchased at www.s-t-imulation.eventbrite.com.

All proceeds from the event will go to Project 10.