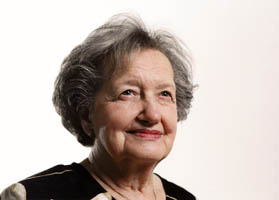 In many ways, the Obama administration’s new plan to map the human brain has its origins in the work of Brenda Milner, the neuropsychologist whose detailed observations of an amnesia patient in the 1950s showed how memory is rooted in specific regions of the brain.

“Prior to Brenda Milner’s discoveries, many behaviorists and some cognitive psychologists followed the lead of Freud and Skinner in abandoning biology as a useful guide to the study of memory,” the Nobel laureate Dr. Eric Kandel wrote in his memoir, “In Search of Memory.” “Milner’s work changed all that.”

The amnesia patient, Henry Molaison (known during his lifetime only as H.M., to protect his privacy), died at 82 in 2008; his brain is now being dissected and digitally mapped in exquisite detail.

But Dr. Milner is still very much alive. Two months short of her 95th birthday, she puts in full days at the Montreal Neurological Institute and Hospital, where she is studying left/right brain differences.

We spoke in her offices here at “the Neuro” and at the annual meeting of the American Association for the Advancement of Science in Boston.