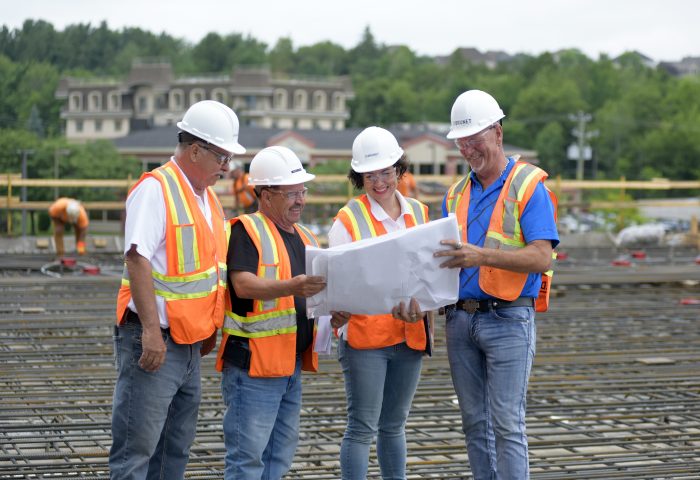 Construction resumed on Monday, May 11, on the building that will house the classrooms, amphitheatre and other teaching facilities of McGill University’s Campus Outaouais. The Quebec government suspended construction projects across the province on March 23 due to the COVID-19 pandemic. After an eight-week interruption, the teams are back at work on the construction of the Campus and the Groupe de médecine familiale universitaire (GMF-U) de Gatineau, part of the Centre intégré de santé et de services sociaux (CISSS) de l’Outaouais.

Construction of the two floors will be completed by late fall, after which the premises can be set up for the official opening.

Despite the construction delay, on August 18, the first cohort of 24 students will begin their training at the Campus Outaouais.

Faculty, lecturers and administrators are ready and eager to welcome students. The semester starts at the same time as at the Montreal Campus.

Construction started in the Fall of 2018 and, right up until the start of the pandemic, the work was overseen by Sophie Brunet, Project Manager of Ed Brunet et Associés Inc., the project’s general contractor. Sophie is a McGill architecture graduate who grew up in Outaouais. Here is her story. 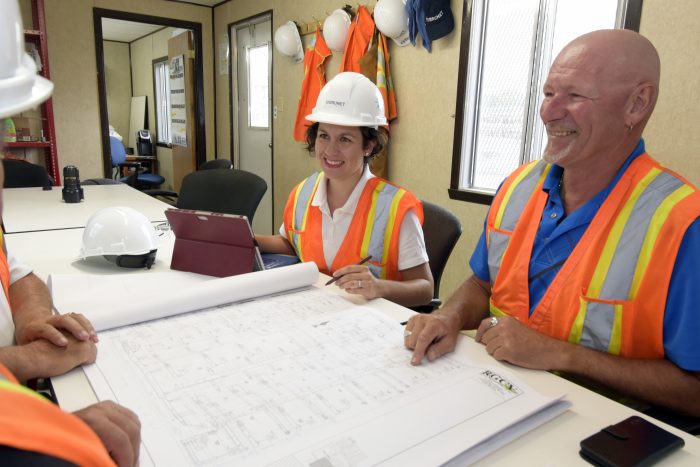 Inside the trailer of the superintendent of the future Campus Outaouais of the McGill Faculty of Medicine, Sophie Brunet (M. Arch. 2009) is discussing the construction. She is standing in front of an impressive pile of plans. Hundreds of sheets are spread out on her inclined table. Yet the architect looks completely in control. Project manager for general contractor Ed Brunet and Associates—a company that has been in the region since 1901 —Sophie is the one who keeps projects on budget and schedule, places orders, asks for clarifications about the plans, negotiates contracts and coordinates the endless bustle of workers and machinery.

On this particular day, the superintendent has to face a classic problem: a subcontractor is complaining about not being paid enough. “Is it written on the contract? Well, I’m going to talk to him,” says Sophie. She explains her approach: “When there is a dispute to be resolved, the key is not to confront people, but to look for a solution. That’s my approach.”

At the age of 33, Sophie is like a fish in water in the very masculine world of construction. “I don’t have much trouble with it. The guys are generally respectful toward me. I’ve been working in this business since I was 15,” says the architect. A member of the local chapter of the Association de la construction du Québec, she is very proud of the fact she has three to six women on her job site, out of a total of 65 to 70 workers, which is well above the industry average of 2.1%. “I hope the number of women keeps increasing.”

Sophie is a fifth-generation member of the Brunet family business, Ed Brunet and Associates, which employs between 50 and 80 people depending on the season. The Gatineau firm, founded by her great-great-grandfather Édouard 119 years ago, is the second-oldest general contractor in Canada. Sophie’s great-grandfather Raymond was even the mayor of Hull from 1941 to 1948. Five members of the family work at the company’s head office on Dumas Street, in an old industrial park at the end of Highway 50: her father Raymond, her mother Murielle Brazeau, her brother Sébastien and her husband Ali Torabi. “The majority of partners are executives who are not members of the family,” says Sophie, who is managing the project while rearing the next generation of Brunets. A mother of two young children, she is pregnant with her third child, due to be born at the end of May. But like her parents, she won’t be pushing her children to join the company. “They will do what they want. In any case, there will be a new generation coming in!”

As a McGill graduate, Sophie is particularly proud to be working on a project at her alma mater in her native region, which she left only temporarily for her studies. “In Outaouais, we’ve always had a problem retaining doctors,” she says. “Having a campus here will help us keep doctors in the community.”

Sophie chose McGill for her studies because of its reputation, but also for the heritage architecture of its campus. She found not only her husband at McGill, but also two professors who became true mentors. “Adrian Sheppard was very technical and his lecture on skyscrapers was memorable. Ricardo Castro, who accompanied us on a trip to Greece, introduced me to philosophy, literature and understanding the external factors that influence architecture.”

The notions have been very useful for dealing with the constraints of the site she is managing. The project involves simultaneously building a family medicine group and a university campus above the emergency room of the Gatineau Hospital. The hospital has one of the two largest emergency rooms in the region and could not interrupt its activities during the 15-month construction period!

“We had to organize the work schedule to give priority to the emergency department, and reduce noise and vibrations,” she says. She wasn’t about to let cranes block ambulance accesses, or risk harming patients and professionals by grinding concrete on the roof while there were people underneath. “And since we couldn’t break through the ceiling to pass the plumbing up to the next floor, we had to install a large vacuum drainage system for the 60 sinks, a first in Quebec and Canada for a facility of this size.”

“The complexity of this project is similar in scope to many other projects I have been lucky enough to manage,” says Michel Leblanc, the project director, whose other projects have included the CHUM Research Centre in Montreal and the Jean and Marcelle Coutu Pavilion at the Université de Montréal, which houses the Faculty of Pharmacy, among others. Since Michel has to deliver a “turnkey” campus, it is important to stay close to the construction team. He talks with the construction manager, as well as professionals and the Société québécoise des infrastructures. “We have to coordinate with various partners, including McGill University, the Ministries of Health and Education, the CISSS de l’Outaouais and the Université du Québec en Outaouais, which with the McGill Faculty of Science, will offer the preparatory year in medicine.”

Sophie holds a conference at least once a day with the project superintendent, Benoit Henri, a carpenter by training who joined Ed Brunet a year before she was born. “I don’t know what we would do without experienced employees like him,” she says.

Both have to contend with the main issue in Quebec’s construction industry: the labour shortage, which is affecting all construction sites, but particularly ones in the Outaouais because of its proximity to Ontario. “A good job site won’t necessarily work faster just because there are more people on it,” she says. “It takes coordination.”  Sophie has instituted a five-zone job management system that maximizes productivity by moving staff as each zone progresses. “That’s what my job is all about: finding solutions.”

Sophie is now on maternity leave. The last few weeks of construction will be overseen by Alexandre Bisson, Jr. Eng., Project Manager, Ed Brunet and Associates. Everyone at Campus Outaouais and the McGill Faculty of Medicine sincerely thanks Sophie for her immesurable contributions to this historic project and wish her and her family well.