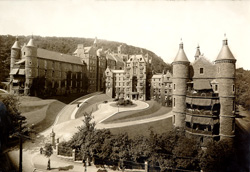 The Royal Victoria Hospital, high on the slopes of Mount Royal, has been part of Montreal’s urban landscape for well over a century. It looms over the city like a great greystone castle and, over the last 119 years, its staff has treated thousands of Montrealers, delivering their babies, fixing their wounds, curing their illnesses and comforting them in their last hours.

The hospital officially opened on Dec. 2, 1893, in the presence of Governor-General Sir John Hamilton-Gordon (the earl of Aberdeen), to meet the needs of the sick “of all races and creeds” and to train the nurses to care for them. The founders paid about $90,000 for the 18 acres of land on which the hospital stands and spent another $800,000 or so on construction, an impressive sum for the day. They hired Henry Saxon Snell, a prominent British architect, to design the complex, and 600 men to build it.

Most records from the first half-century of the Royal Victoria’s existence are kept at the McGill University Archives. There, they are subject to number of conditions on their accessibility, but as a public archive, McGill struggles to make available as much of its enormous collection as possible.