Graduate students boil down their research into three-minute presentations 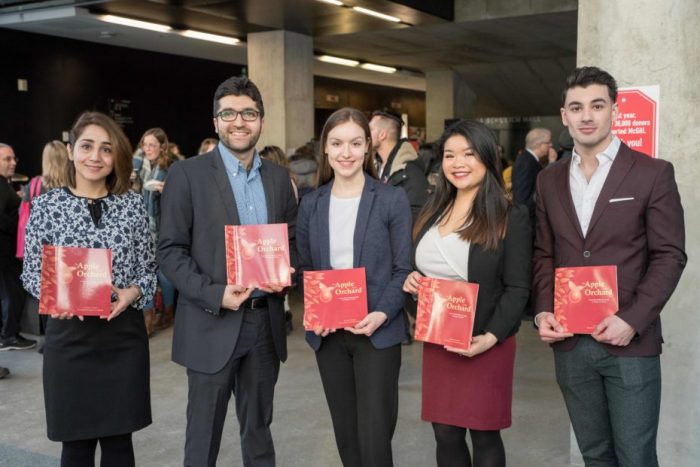 No props. One take. One slide. Three minutes. The 3-Minute Thesis/Ma thèse en 180 secondes competition is the academic version of the elevator pitch.

The 8th edition of 3MT was held at the Tanna Schulich Hall on Tuesday, March 12, from 2 – 4 pm before a crowd of some 150 people. Eighteen graduate students, nine women and nine men, presented years of research to a rapt and sympathetic audience in an entertaining and lively crash course on their respective research.

This year’s winner in English was Zeinab Sharifi, PhD candidate in Experimental Medicine. Mariève Cyr, a Masters student in Psychiatry, won in the French language category. The People’s Choice Award, selected by those present and watching online, went to Ammar Alsheghri, PhD candidate in Mining and Minerals Engineering.

“A lot of really dedicated people, including past 3MT winners, and members of the staff and faculty, helped students synthesize their work,” said Professor Josephine Nalbantoglu, Dean of Graduate and Postdoctoral Studies, and MC of the event. “They also really just fell in love with the students because they are so dedicated and charming.”

From cancer treatment to light therapy

English first-prize winner Sharifi received $750, and advances to the Eastern Region finals to be held at McGill in April, with the possibility of going on to the national competition. Her winning presentation, entitled New Strategy, New Hope, was about treating glioblastoma, one of the most aggressive forms of cancer, using a substance called combi-molecules.

A panel of judges assessed contestants on their overall communication skills and ability to explain their work in understandable and engaging terms.

In all, 11 PhD candidates, and seven Masters students took part in the final heat, whittled down from a record 104 McGill graduate students who entered the competition when it started last fall. Of the 18 finalists who presented 16 are studying in Science Technology Engineering and Medicine (STEM) subjects, and two are in Arts.

The numbers underline how 3MT/MT180 is really catching on at McGill. Dean Nalbantoglu  said that the first year of the competition saw 30 entrants, rising to 60 last year and up to 104 this year. Next year she expects an even larger number as word gets out about the extensive communications training offered to entrants.

3MT is a global competition, founded by the University of Queensland in 2008, with over 350 participating universities around the world.

Watch the video of the 2019 edition of McGill’s MT3/MT180.
View a promotional video about McGill’s 3MT/MT180 competition.