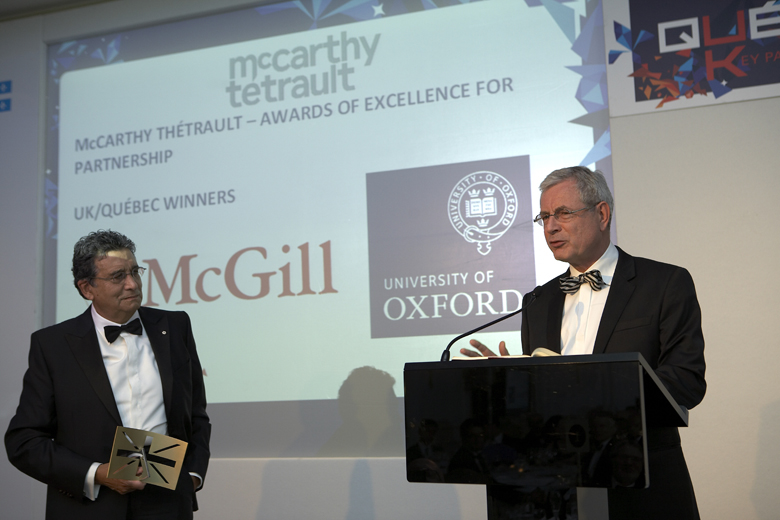 McGill-Oxford neuroscience collaboration wins the McCarthy Tétrault Award of Excellence for Partnership from the Quebec Government Office in London.

A cutting-edge neuroscience collaboration between McGill University – through its Brain@McGill network – and the University of Oxford received the McCarthy Tetrault Award of Excellence for Partnership from the Quebec Government Office in London.

The prestigious award was part of celebrations marking the office’s 50th anniversary and recognized the McGill-Oxford initiative as “an outstanding project of cooperation with a lasting impact in both the UK and Quebec.”

“For over half a century, Quebec’s London Office has worked tirelessly to forge strong and mutually beneficial economic ties between Quebec and the UK,” says Dr. Rose Goldstein, McGill’s Vice-Principal (Research and International Relations). “This award recognizes that world-class research plays a significant role in creating long-term prosperity for our regions and beyond. It is also a bold acknowledgement that collaboration across borders and disciplines holds the key to major scientific advancements.”

Brain@McGill is a network of scientists, teaching hospitals, and research institutions, all of which share an advanced interest in molecular, cellular, systems, behavioural and cognitive neuroscience. The program is truly innovative, focusing on a collaborative and interdisciplinary approach to the field and working to promote: active partnerships with other world-leading institutions; advanced training; groundbreaking research; unique programs; connectivity between key players; and the importance of brain research to society, arts and culture.

Building on longstanding collaborations between their researchers, McGill and Oxford, two of the world’s leading centres in neuroscience, joined forces in 2009 by creating a three-year funding program to support the advanced training of students and research in neuroscience at both institutions. Through a relatively small investment ($256,000 CAD to date) targeting workshops, pilot projects, and grant writing exercises, the partnership has resulted in the funding of 24 joint proposals as well as training and exchange opportunities for dozens of students. One of the key successes of the initial funding was a $9.6-million CAD grant from the Wellcome Trust to a leading Oxford research group that partners with McGill through this program.

“Enthusiasm for this initiative remains extremely high at both institutions,” said Claudio Cuello, Chair of the Brain@McGill Committee, as he accepted the award. “The number of applications keeps going up, and our model of collaboration is attracting more and more attention from potential partners. For those reasons, we believe the best is yet to come for the McGill-Oxford partnership.”

The Quebec Government Office in London was opened in 1962 and represents Quebec in the United Kingdom, Republic of Ireland, and the Nordic Countries. While the United Kingdom has long been one of Quebec’s key economic partners, in recent years it has become Quebec’s primary European partner, with $6-billion CAD in annual trade.