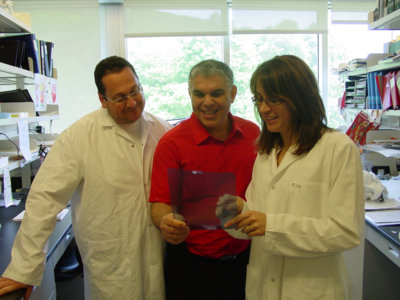 Researchers from McGill block onset of cachexia in animal models

Cachexia, a syndrome characterized by rapid weight loss and muscle deterioration, is a major cause of death among patients suffering from diseases like cancer, AIDS and chronic infection. In fact, 30 per cent of cancer-related deaths are the result of cachexia-induced muscle loss rather than the primary malignancy. And while scientists are making strides in gaining a better understanding of this deadly condition, no effective anti-cachectic therapies exist to date. However, a newly published study by McGill University researchers shows that a low dose of Pateamine A (PatA) is effective at preventing cancer-induced muscle wasting – findings that could someday point to the development of cachexia-fighting drugs.

“To this day, when patients are diagnosed with cachexia, they’re sent to palliative care. Their illness is no longer treatable. They start losing muscle, including that which is in the lungs and they eventually die by asphyxia,” explained Dr. Imed Gallouzi, the paper’s senior author and Associate Professor in McGill’s Dept. of Biochemistry and researcher at the Goodman Cancer Research Centre. “It’s not that there are ineffective drugs out there, it’s that there are no approved drugs to treat this condition right now.”

Recently, compounds like PatA, a natural derivative of marine sponge known to interfere with protein production inside the cell and Episilvestrol (Epi), a plant compound, have been found to block tumor growth. Since tumors and inflammation are conditions that lead to muscle wasting, Gallouzi and his team tested the effect of different doses of PatA and Epi as potential anti-cachetic agents.

“We observed that a low dose of PatA blocks the onset of muscle wasting in two animal models by blocking the expression of factors that promote cachexia,” said Gallouzi. “PatA was originally identified as an inhibitor of the early steps that lead to protein synthesis inside the cell. As such, however, PatA can be toxic. Surprisingly, when we used this compound at a lower dose, we observed that it prevents cachexia-induced muscle loss, by specifically interfering with the expression of promoters of muscle loss. Now we need to confirm that PatA, and its family of compounds, is effective in blocking muscle wasting in other animal models.”