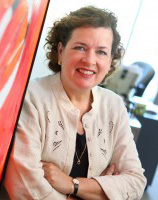 Professor Bartha Maria Knoppers, Director of the Centre of Genomics and Policy, has pursued a productive university career in the related fields of medical law and biomedical ethics. For many years, she has been studying issues of societal importance such as biobanks, stem cells, cloning, human biotechnologies, genetic research on populations, assisted reproduction, neonatal screening, pharmacogenomics, rare diseases and the future of public health. A world leader in the fight for the social ownership of genetics and genomics, she played a key role in Genome Canada, Génome Québec, in the CARTaGENE infrastructure, the Canadian Stem Cell Network and in UNESCO and the Human Genome Organization (HUGO).

She is one of the 31 recipients of the Ordre national du Québec decorated by the Premier at a ceremony that took place in the Red Room at the Parliament building on June 7, 2012.

Introduced in June 1984, the Ordre national du Québec is awarded annually to exceptional men and women with remarkable achievements in a sphere of activity in Quebec society. This honour is also presented to foreign figures who have developed significant ties with Quebec and who have made a noteworthy contribution to its development. The Ordre national du Québec has three ranks: Chevalier, Officier and Grand Officier (Knight, Officer and Grand Officer).

“The men and women we honour have made an exceptional contribution to developing Quebec or extending its influence abroad, in all fields of human activity,” said the Premier.

Every fall, a public call for nominations is launched in the major dailies and regional media. The Cabinet receives recommendations from the Council of the Ordre national du Québec, and candidates are then officially named by government decree.

For more information, visit the website of the Ordre national du Québec.