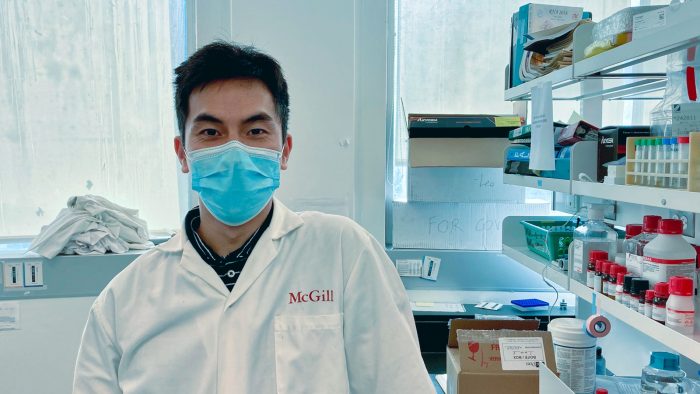 Scientists are used to playing the long game, chipping away at a small part of a much larger scientific question, often over the course of many years. Projects that go from the lab to the real world in the span of just a few months are practically unheard of. But that’s exactly what a group of graduate students recently experienced while working on McGill’s COVID-19 test kit-making project, led by professors Martin Schmeing, Director of the Centre de recherche en biologie structurale (CRBS), and Don van Meyel, Director of the Centre for Translational Biology at the Research Institute of the McGill University Health Centre (RI-MUHC).

The large team of CRBS scientists is producing made-at-McGill kits for the MUHC testing lab as part of a pilot project that could help boost testing capacity across Canada, through a collaboration with the National Research Council of Canada.

“Everyone really came together and pushed this through at a pace that’s unprecedented, as least in my two- or three-year career,” says Leo Shen, who was recruited to help out with the project by his supervisor, biochemistry professor Jerry Pelletier. The Vancouver native, who just completed his MSc in Biochemistry and will be starting medical school at Johns Hopkins in the fall, never dreamed things could move so quickly. “When I was doing my Master’s, I didn’t think that my own science or any of the work I was doing in the lab at the time would be applicable to the clinic straightaway.”

An opportunity to help

Ditto for Kaleena Basran, a first-year chemistry PhD student in Nathan Luedtke’s lab, who was one of the first students to join the project back in March. “I never thought we’d be able to help,” says Kaleena, who is originally from Ottawa.

When campus shut down on March 13, like many students, Kaleena found herself suddenly unable to access her lab. Then she got a call from Dr. Luedtke. “Since I’m new to the field of DNA chemistry, he suggested this was a really good way for me to get into it quickly,” she says. “I was super excited. It seemed like such a great opportunity to help and also just get back into the swing of working in a lab again, which I really enjoy.”

Like Kaleena, fellow Ottawa native and fourth-year PhD student Andrew Bayne was recruited early in the project. “I was reading the news and hearing all the public health statistics, so when we had the opportunity to contribute to something like that, there was no question for me,” says Andrew, who’s in the lab of pharmacology professor Jean-François Trempe. “This was the perfect use of the skills that I have been working to develop for the last several years.”

At first, Leo admits, he didn’t know what he was getting himself into. “I thought it would be a two- or three-day thing where I would just do RT-PCR testing,” he recalls, referring to the part of the COVID-19 test that detects the virus in a sample. “But then the more I spoke with Martin, the more it became clear that this was a pretty titanic endeavour in terms of actually creating a kit that can substitute for what’s being used currently across Canada.”

Before he knew it, his Master’s wrap-up was on ice and he was putting all his time into the project. Same for Andrew and Kaleena, who also put their own projects aside in order to focus on the test-kit project.

That’s not to say it was all smooth sailing.

First of all, they had to get used to the new way of working in the lab – masks, PPE, social distancing, safety protocols. “I used to take for granted being able to walk to another lab and just ask somebody who I knew would be there: ‘Can I use this machine now?’” says Andrew. “Now there are a lot of new booking procedures to make sure the number of people is limited.”

Then there were the actual technical skills. “At first it was a lot of learning,” says Kaleena. “For instance, when you have the viral RNA from a patient sample, you need to be able to extract it out of the cells. So I had the opportunity to make these magnetic nanoparticles, which is totally not my area of chemistry. But I said to myself ‘I can do this.’ And it’s working out really well.” In her pre-COVID life, Kaleena was working on a probe that lights up when bound to specific DNA sequences in a bacterial genome, which would eventually allow hospital labs to quickly identify bacterial strands.

“There was definitely a learning curve to it,” agrees Andrew, who is studying the mechanisms of mitochondria to better understand and try to develop cures for neurodegenerative diseases like Parkinson’s. “But the technical skills are really, really easily transferable, even if the pathways being studied are worlds apart.”

The learning has gone way beyond lab skills for these grad students, often in surprising ways.

They were all amazed at the amount of work that goes into coordinating a large project like this, which involved teams from both the Faculties of Medicine and Science, as well as hospital labs and outside suppliers. “This project made me surprisingly more efficient in the lab, and also more effective at communicating within and across teams to push things forward,” says Andrew.

Kaleena says the experience has given her a glimpse into what working in industry would be like. “I’m in charge of ordering all the supplies that we need for the primers and probes that we’re making, as well as the beads. So I got really thrown in there in terms of how to do ordering and everything,” she says. “Industry is something that I was considering, so it was really nice to see right from the start what it feels like.”

It was also a real eye opener for them to see what happens after a project leaves the lab.

“As scientists, a lot of the time we’re pretty removed from it,” says Leo. “From our perspective, it just seems like what we’re doing is the most important and then afterwards, there you go, you have the treatment. But no, not at all. It turns out that there are a lot of hurdles to go through, there are a lot of government bodies that you need to work with as well. And when you’re pushing something out at this scale, there is also a lot of people management.”

A return to normal

Now that the test kits have been delivered, the students have been slowly returning to their own projects, or starting new adventures.

Leo had to wrap up a little earlier so he could spend some time with his family on the west coast before starting med school. “It’s a little bit bittersweet that I’m leaving early,” he says. “Martin and Don have taught me so much. And I’m grateful to my own supervisor Jerry for letting me get involved at the cost of making some progress on my own project. It really felt like a privilege to be involved.”

Kaleena, who is continuing to work on the project for the time being but will gradually transition back to her own PhD project in the coming weeks, feels like she’s been part of something historic: “I’ll be able to tell people in the future when they’re learning about it in history that we were able to contribute to the fight against this,” she says. “It’s really great.