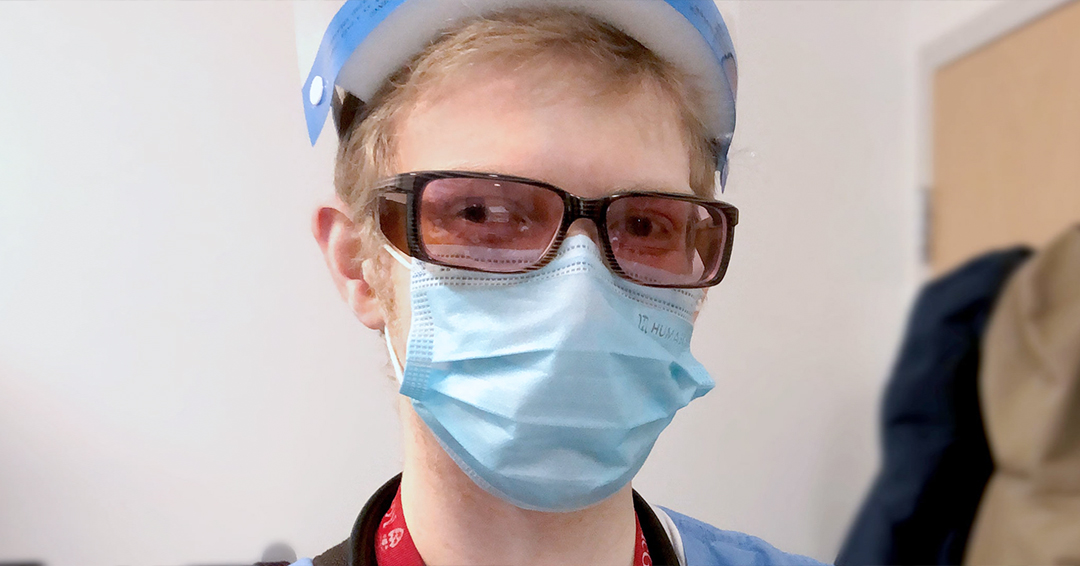 Medical school is challenging enough, and its students are to be lauded for grit. But some have to work even a little harder, like fourth-year student Jack Rudski. He has oculocutaneous albinism, which means that, aside from his pale skin, he has low vision. Rudski’s vision varies with fatigue and lighting, and measured 20/200 at his last evaluation.

“The best way I can describe my vision is like comparing an old TV to a new TV or looking down the wrong end of a telescope,” Rudski says. “You get the big shapes, but you don’t get the details unless you get really, really close, or make things really, really big.”

Because his eyes work independently, he doesn’t have depth perception, and light sensitivity requires him to wear dark glasses.

Support from the OSD

Help at school is crucial for Rudski, who calls McGill’s Office for Students with Disabilities “lifesaving.” During his biochemistry undergraduate years, OSD ensured he could access course materials immediately after a lecture, or even before so he could follow along. Exams were enlarged using optical character recognition, with the tricky scientific symbols copied as best as possible by staff.

In medical school, Rudski works with a variety of magnification tools and sometimes uses audio versions of textbooks and research papers. “I can listen to things a lot more quickly than I can read,” he says, and can retain the information equally well.

Doing a hospital clerkship during a pandemic poses problems, with mandates to physically distance and mask up. Rudski tells who people are by big features, like the shape of their head or colour of their hair. “I have more trouble recognizing people when they are farther away with distancing,” he says. He can rely on voice but has to know them well. Also, before vaccination, students were discouraged from getting too close to patients. “That made everything a bit harder,” he says.

Rudski won’t lie, there are some elements of medicine which are tougher. Some technical skills, like suturing, can be difficult. “I still need to put more time into it,” he says.

But Rudski sees no impediments professionally. “I know my limits, I’m not going to be a surgeon. I’m trying to set myself up for doing something that I know I’ll be able to do. Whether it be with telescopes, magnifying glasses, special electronic magnifiers, I’m really pretty well equipped.”

“I’ve had people make assumptions about my competency in general, without necessarily having watched me. But when they watched me, they realize, Hey, he manages to do things despite his limitations. He might have to do things a bit differently but he still manages and he’s come up with some pretty fun tricks.”

Rudski hopes to pursue internal medicine, which specializes in diseases in adults. He likes the complexity. “It’s kind of how I approach the world — building a bigger picture from taking a look at all of the small bits. It’s like when I magnify things, I only get a small bit of the view and I have to construct everything from it.”

“I also like spending time and talking with patients. That’s really one of the things that gives my day the greatest meaning, when I can actually sit and just talk to someone and make them feel a bit better.”

Dr. Andrea Blotsky, Rudski’s supervisor at St Mary’s Hospital on the Internal Medicine Clinical Teaching Unit admires how he “has managed to adapt his learning style to ensure he’s prepared for any obstacle he may encounter,” she says, and that “brilliant” sense of humour brings out the best in his peers. “Jack is an exceptional medical student who is dedicated to his patients.”

Rudski says, “the people who really keep me going are my parents.” Rudski was diagnosed at four months old by an ophthalmologist who was quick to list to his parents (both of whom are McGill grads) what he would not be able to do. They wisely and quickly found a better doctor who said, “’Just let him explore, he’ll be the best judge. You support him along the way,’” Rudski recounts. “And that’s really what they’ve done. They always remind me to not give up.”

And of the support from the OSD, “I have nothing but the highest regard,” Rudski says. The office he speaks so glowingly of is always ready to help any student, says Associate Director Catherine Loiselle. The OSD’s services to nearly 3,000 students range from academic accommodations and peer support to adaptive technology and alternate text like braille or text-to-speech (or vice versa). “We’ll meet with anybody even if they don’t yet have a diagnosis. We can help them navigate the McGill system or the community-based systems to get help and support. We’re here for the McGill population.”

The numbers of students seeking help are rising every year, because of better disability awareness and assistance at elementary and high schools, Loiselle says. “Accommodations are really important because the goal is to level the playing field for everybody and give them a fair chance to succeed.”

Sometimes students only access disability support once they’re at McGill. “They start gaining confidence in themselves, seeing and understanding how their brain works, how they learn and that it’s okay to learn differently and accept that,” Loiselle says. “For some, their academic path is not linear.”

For students with disabilities, Rudski recommends that they be informed and proactive. “Know what you’re going to need or have some idea of what direction your needs are going in, and what might be out there to help. Be on top of all the deadlines, make sure that you’re organized in terms of asking for things and chasing people down. And don’t let a bit of a rough patch deter you.”