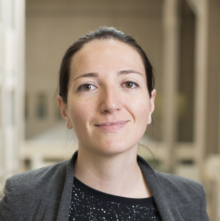 Her previous experience with Parkinson’s disease came while completing her master’s degree in Speech Language Pathology at Université Laval from 2008 to 2010. During that time she was involved in two projects on language and cognition in Parkinson’s disease – a longitudinal study of patients who had been treated with Deep Brain Stimulation and an experimental study that aimed to specify the impacts of procedural memory and executive function deficits over different domains of language (syntax, grammar and reading). “It is because of my involvement in these two projects that I decided to pursue a career in research,” says Dr. Auclair-Ouellet.

Following her master’s degree, Dr. Auclair-Ouellet worked briefly as a Speech Language Pathologist with adults who have aphasia following stroke but remained drawn to looking at language deficits that occur in connection with neurodegenerative diseases. In 2010 she began her PhD under the joint supervision of Dr. Joël Macoir at Université Laval and

Dr. Marion Fossard at Université de Neuchâtel in Switzerland. Her PhD project, supported by a Joseph-Armand Bombardier graduate scholarship from the Social Sciences and Humanities Research Council, was a study of the impact of semantic (meaning processing) impairment on the production and comprehension of morphologically complex words (conjugated verbs, words with prefixes and suffixes). The project was the first to use well-controlled tests of derivational morphology (words with prefixes and suffixes) in a group of individuals with the semantic variant of primary progressive aphasia (svPPA). If the results are supported by other studies, difficulties understanding and producing suffixed and prefixed words could be included as a supportive feature of svPPA diagnosis.

Dr. Auclair-Ouellet says that she joined the School of Communication Sciences and Disorders at McGill because of the vibrant research community and because of the University’s commitment to excellence and innovation. In addition to working on Parkinson’s disease, she plans to conduct research on other neurodegenerative diseases including Alzheimer’s disease and primary progressive aphasia.

“The goal of my research is to identify language markers that are reliable, distinctive, and predictive of decline or recovery, depending on the population, and to develop treatments and interventions that are better adapted to communication impairments in different acquired language disorders,” she says. “I could not hope for a better environment for conducting my research, and I feel privileged to have the opportunity to teach outstanding future Speech Language Pathologists and Communication Sciences researchers.”