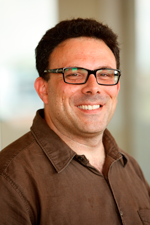 Dr. Ed Ruthazer is a mapmaker but, his landscape is the developing brain – specifically the neuronal circuitry, which is the network of connections between nerve cells. His research at The Montreal Neurological Institute and Hospital – The Neuro at McGill University, reveals the brain as a dynamic landscape where connections between nerves are plastic, changing and adapting to the demands of the environment. Dr. Ruthazer is the winner of the inaugural Young Investigator Award from the Canadian Association for Neuroscience, which recognizes outstanding research achievements.  His laboratory uses time-lapse imaging to chart the changes that take place in brain circuitry during development in the hope of advancing treatments for injuries to the central nervous system and therapies for developmental disorders such as autism and schizophrenia. These diseases are widely held to result from errors in brain wiring due to a disruption of the complex interactions between genetic and environmental influences during brain development.

Astoundingly, nearly one out of every 100 Canadians suffers from one of these disorders, which have been estimated to cost the Canadian economy over $10 billion annually in addition to inflicting a devastating impact on patients and their families. Two of Dr. Ruthazer’s recent publications in prominent science journals advance our knowledge of how the brain develops, which is vital to developing advanced therapies, treatments and even early intervention.

His new study, published in the prestigious journal Neuron, vividly illustrates the effect of environmental inputs on the developing brain. Exposure to just 20 minutes of intensive visual stimulation during development led to enhanced visual acuity and higher sensitivity to finer and smaller visual targets than non-conditioned controls.

“There is no room for inaccuracy in the mature brain,” says Dr. Ruthazer. In the developing brain, there is an initial overproduction of imprecise connections between nerve cells. During development and learning, these connections are pruned, leaving connections that are stronger and more specific. This refinement occurs in response to inputs from the environment. “Our study shows that intense visual stimulation renders nerve cells more receptive to subsequent learning and refinement.”

Importantly, Dr. Ruthazer’s group identified the molecular mechanisms underlying the changes in the nervous system. Environmental stimulation activates the production of a protein called Brain Derived Neurotrophic Factor, or BDNF, which plays a major role in the plasticity of neurons and has two forms: proBDNF facilitates the weakening of inaccurate or poorly targeted connections and mature BDNF strengthens appropriate, effective connections. In this case, in response to environmental activity, these processes led to refinement of nerve cell connections involved in the visual system and required for visual acuity. “This indicates that sensory experience during development leads to rapid production of key proteins used at nerve cell connections to confer long-term stability and increased efficacy at appropriate connection points, while simultaneously helping to eliminate inappropriate connections.”

In the developing visual system, nerve cells from the retina at the back of the eye connect with very specific points within the visual part of the brain, the tectum, in order to ensure that the retina is properly represented in the brain and able to relay accurate visual signals. A highly sophisticated guidance cue system is in place to ensure nerve cells innervate correct points in the brain.

The formation of this accurate map in the brain relies not only on guidance cues but also on patterned activity in the retina. “We are starting to understand the experience-dependent or  ‘nurture’ aspects of development, and these are often harder to study than the genetically encoded or ‘nature’ elements, because the range of possible sensory experiences is so vast,” says Dr. Ruthazer, “but even the ‘nature’ element of development can be complex and occasionally needs to be re-examined.”

Over a decade ago, Friedrich Bonhoeffer and colleagues identified the key molecular guidance cues involved in setting up visual circuitry in the brain: ephrins and their receptors known as Ephs. These molecules are further subdivided into A and B families. “A” family members are expressed in a rostrocaudal (or front-to-back) gradient in the tectum, whereas “B” family members exhibit a dorsoventral (top-to-bottom) gradient of expression.  Much like longitude and latitude lines on a map of the Earth, these gradients of expression suggest that the respective levels of A and B Ephs and ephrins specify positional coordinates in the brain to guide retinal axons to identify and innervate their corresponding target sites within the tectum.  This influential model can be found in most undergraduate textbooks today.

Remarkably, until now, the actual developmental expression patterns of the Ephs and ephrins in the brain had not been examined in detail. The results of a longitudinal study of their expression patterns recently published in Developmental Neurobiology by Valerie Higenell in Dr. Ruthazer’s lab, in collaboration with colleagues at SUNY downstate and UC Santa Cruz, are surprising and demand a fundamental shift in how scientists think about the contributions of the Eph and ephrin gradients to visual system mapping.

“While our data about the expression gradients of EphA and ephrin-A was very much consistent with the prevailing model, we found that the gradient of EphB expression across the tectum was exactly the opposite orientation to what had been previously reported,” Dr. Ruthazer explained, “It is as if we suddenly discovered that we (and everyone else in the field) had been holding our map upside-down all along.” The study confirmed that ephrin-As display a high caudal to low rostral expression pattern across the tectum, roughly complementary to the expression of EphAs, as expected.  In contrast to the prevailing model however, Ruthazer’s study found that EphBs are not expressed in the tectum in a high ventral to low dorsal (bottom-to-top) gradient as previously reported by others, but rather in a high dorsal to low ventral (top-to-bottom) pattern.

Ruthazer’s study also revealed that the EphB gradient pattern is only present during early developmental stages, and levels off to high, uniform expression across the tectum in older animals, suggesting that EphB and ephrin-B signaling may have an important role independent of dorsoventral axon mapping as the brain matures.