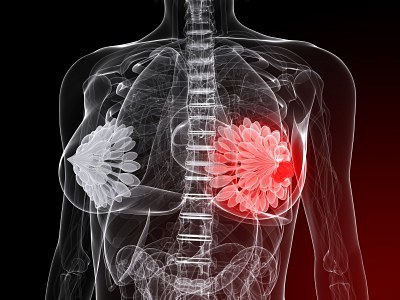 A new potential target to slow breast cancer tumor progression and metastasis has been identified by a team of researchers led by Dr. Richard Kremer from the Research Institute of the McGill University Health Centre (RI-MUHC). Complications in breast cancer patients are commonly caused by the spread of the disease through metastasis to other parts of the body, most often to the bones and lungs. These findings, published this week in the Journal of Clinical Investigation (JCI), suggest that a specific protein plays a key role in the progression of the disease outside of the initial tumor area.

Researchers showed that this particular target called parathyroid hormone-related protein (PTHrP), present at high levels in cancers, is involved in key stages of breast cancer initiation, progression and metastatic spread. “We are hoping for a significant effect on the prevention of breast cancer recurrence, growth and development by using a strategy to decrease the production of that particular protein,” says Dr. Richard Kremer, co-director of the Musculoskeletal Axis of the RI-MUHC and a professor in the Department of Medicine at McGill University.

To better understand the role of PTHrP in cancer development, researchers eliminated the production of the hormone from breast cells using a strategy called “conditional knockout” and then studied the progression of the tumor. “The results showed that without the presence of PTHrP in the breast, even before the tumor developed, a reduction of 80 to 90 per cent in the growth of the tumor was observed,” explains Dr. Kremer. “The removal of this hormone in the breast and breast tumors block not only the growth of the tumors but also its spread to different organs.”

In order to bring this strategy one step closer to the patient, Dr. Kremer and his team developed a monoclonal antibody against PTHrP – a molecule that mimics the antibodies produced as part of the immune system’s response to invaders, which is widely used in cancer treatment. Researchers were able to stop the growth of human breast tumors implanted in animal models and their metastatic spread, paving the way for clinical trials in the near future.

“This opens the door to treatment of patients with a more aggressive type of breast cancer who are not responsive to standard treatment,” says Dr. Kremer. “I see a potential for better treatment of the disease and improvement in quality of life for a very significant number of patients.”

This study was made possible by grants from the Canadian Institutes of Health Research (CIHR), from the Susan G. Komen for the Cure Foundation and from the US Department of Defense.