“Dr. Milner is an inspiring woman and a model of perseverance for all” 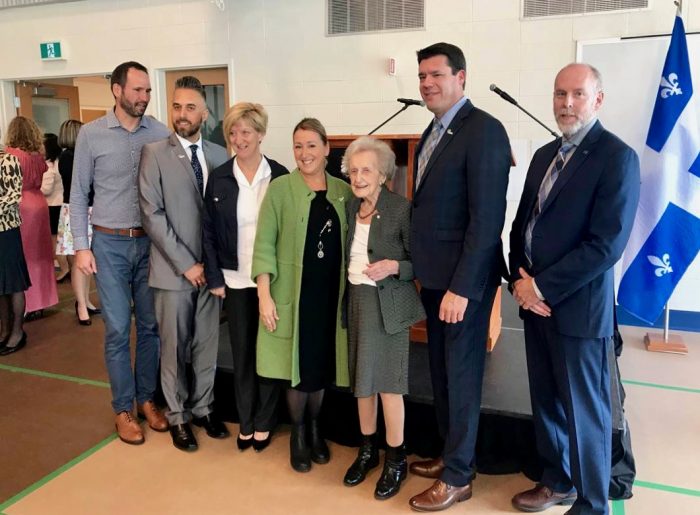 A new school for students with special needs, named after esteemed neuroscientist Brenda Milner, has opened up in a suburb of Montreal. Milner, who is 101 years old, delivered a speech at the much-anticipated inauguration of L’École Régionale Brenda Milner – Brenda Milner Regional School in Châteauguay on October 6.

This new specialized school has a regional mandate and will accommodate 90 students, aged 4 to 21, with profound or moderate-to-severe intellectual disabilities and associated disorders.  Students will be supported by several specialists: specialized teachers, psychologists, physical and occupational therapists. In addition to classrooms, the school has multi-sensory rooms, specialized areas for music therapy, occupational therapy, a therapeutic pool, gymnasium and outdoor playground.

“Dr. Milner is an inspiring woman and a model of perseverance for all,” said Marie-Louise Kerneïs, Chair of the Council of Commissioners of the Commission scolaire des Grandes-Seigneuries, when the name of the new school was adopted.

“To advance knowledge in her field, as she was able to do brilliantly, she had to push ever further the curiosity that animates her, the strength that characterizes her and that has allowed her to innovate. By her scientific contribution, she has influenced more than a generation of researchers, thereby enhancing the education and human possibilities to overcome certain obstacles. It is by taking inspiration from her career that the students of our specialized school will be able to bring out their strength and use their full potential in an environment adapted to their needs.”

Milner is one of the most important neuroscientists of the 21st century, having pioneered research into the human brain and is credited with creating the field of cognitive neuroscience. She is the Dorothy J. Killam Professor at The Neuro and a professor in the Department of Neurology and Neurosurgery, McGill University. Her contributions revolutionized our understanding of how brain structures govern different learning, memory, and speech functions, and she has received numerous major awards and honours.