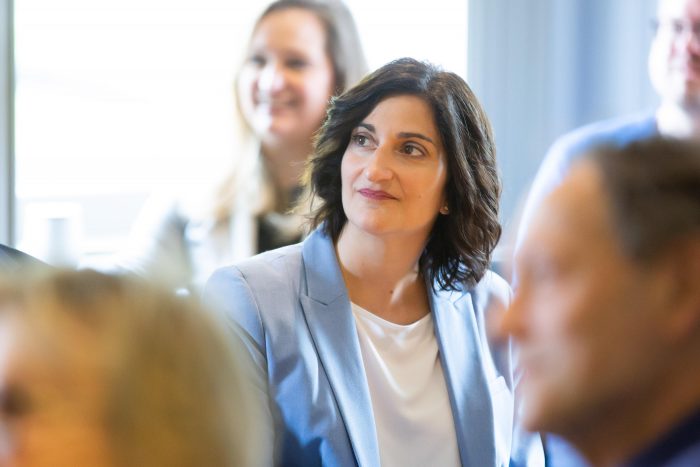 What motivates the modern learner to seek feedback for learning and to improve their performance?

Dr. Joanne Alfieri is exploring this question as the recently named 2019-20 Richard and Sylvia Cruess Faculty Scholar in Medical Education. The goal of this position is to promote excellence and scholarship in health sciences education at McGill and at the new Institute of Health Sciences Education.

Dr. Alfieri’s research is timely as Canadian institutions transition to a competency-based medical education (CBME) model and away from the traditional time-based model. This transition will necessitate more frequent, objective and formative assessment of learners.

Dr. Alfieri graduated from McGill Medicine in 2004 and completed her residency in 2010. It was during her fourth year of medical school that she undertook her first project in medical education. Working with Dr. Lorraine Portelance, then Radiation Oncologist at the McGill University Health Centre (MUHC), Dr. Alfieri developed and conducted an impact evaluation of an interactive, web-based radiological anatomy learning module for radiation oncology residents.

“It was an incredibly rewarding project to be involved with and one of the first curriculum evaluations published in radiation oncology,” said Dr. Alfieri. “It exposed me to medical education as an area of research.”

“I felt an inexplicable attraction to the field of education and that I could make a significant impact to the lives of learners and hopefully, through those learners, patients,” said Dr. Alfieri.

In 2012, following her Fellowship at the Peter MacCallum Cancer Center in Melbourne, Australia, Dr. Alfieri was appointed Assistant Professor in the Department of Oncology. She is a practicing Radiation Oncologist specializing in the treatment of gynecological and gastrointestinal malignancies at the Cedar Cancer Centre of the MUHC. With her background in medical education, she was appointed Program Director for the Radiation Oncology Post-Graduate Residency Training Program in 2015.

Recognized as a medical education champion, Dr. Alfieri was appointed as the inaugural Director of Education for the Gerald Bronfman Department of Oncology in 2017. She is also mentoring six medical students from the Class of 2020 as an Osler Fellow through the Physician Apprenticeship Program.

Dr. Alfieri is doing all this, along with her clinical research, while raising two children and completing a Masters of Medical Education through the University of Dundee, Scotland.

Dr. Alfieri is not only at the core of several key initiatives in research and teaching at all levels of education, she is playing a leadership role as a clinical representative on the Steering Educational Excellence Committee led by Dr. Annette Majnemer, Vice-Dean, Education.

“I feel quite passionate about the recognition and valuing of teaching and medical education scholarship,” said Dr. Alfieri. “It is a privilege to be part of this influential committee. I feel I am actively contributing to change on this front.”

Despite all this hard work, there are still students and residents struggling with disengagement from their professional development.

“I became curious as to why there is such a strong sense that today’s learners are different – is it a ‘millennial’ thing or not,” Dr. Alfieri asked. “This led me to contemplate the concept of motivation and I began to put together a proposal to study the interplay between motivation for learning and the way learners seek feedback.”

Dr. Alfieri’s work will build on theoretical models from social and organisational psychology to explore research questions related to feedback-seeking behaviour and the link to goal-orientation.

Insights through this research will hopefully contribute to improving feedback and assessment tools developed for the transition to CBME.  The results of this study may also have implications for resident workshops on self-assessment and goal-setting, and for the creation of Faculty Development workshops on giving feedback.

On being named the Richard and Sylvia Cruess Faculty Scholar, Dr. Alfieri says it really feels validating for the work she has done while also strengthening her passion to pursue research in medical education.

“This brings back memories,” she said. “Here are individuals that totally shaped my understanding of professionalism. They were icons at the school. They not only defined professionalism but also modelled it, and now, here I am, doing a project under their name. It’s very humbling for me.”