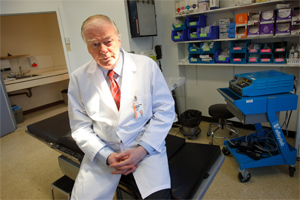 Dr. David Mulder, former Surgeon-in-chief of the Montreal General Hospital (MGH), Chairman of the Department of Surgery and Director of the Division of Cardiovascular and Thoracic Surgery at McGill University and current Chief Surgeon of the Montreal Canadiens organization, was honoured this week at the unveiling of the Dr. David S. Mulder Trauma Centre at the MGH of the McGill University Health Centre (MUHC).  The naming of the trauma centre also launched the MGH Foundation’s $20 million Care at the Highest Level fundraising campaign.

“The MUHC’s legacy of pride is underpinned by remarkable and compassionate healthcare professionals who make lifesaving decisions with patients and their families and then do everything possible to achieve the best outcomes,” said Normand Rinfret, President and Executive Director of the MUHC. “Dr. Mulder’s cutting-edge contributions to surgery and leadership in trauma care continue to shape that very legacy. As such, together with the Montreal General Hospital Foundation, the MUHC is pleased to express its pride by calling downtown Montreal’s epicentre of exceptional trauma care for adults the Dr. David S. Mulder Trauma Centre.”

Over the course of his distinguished career, Dr. Mulder has played a prominent role in the development of clinical care, teaching and research at the MGH of the MUHC and McGill University, as well as the restructuring of trauma care in the province of Quebec. As recently as the early 1990s, the mortality rate of people entering hospitals in Quebec with traumatic injuries hovered around 50 per cent. Since the establishment of Quebec’s province-wide trauma system in 1993, for which Dr. Mulder was a major driving force, that rate has dropped dramatically to around 5 per cent.

“Dr. Mulder has taken a leadership role as a surgeon, a scholar and educator for over 50 years. He has mentored many physicians and healthcare workers, many of whom are based here at the MUHC, and others who are now saving lives at institutions around the world,” said Dr. Tarek Razek, MUHC Director of Adult Trauma and Co-director of the Centre for Global Surgery. “This is a fitting honour for a man that has profoundly touched so many lives.”

For the most serious of traumatic incidents in Montreal south of Highway 40, in Western Montérégie, and in Northern Quebec, the Dr. David S. Mulder Trauma Centre is one of only three level-one trauma centres in Quebec that provides ultra-specialized trauma care for adults, and the only one in downtown Montreal providing coverage to over 2 million Quebecers. Each year the centre receives some 10,000 trauma victims, many of whom require surgery, intensive care and rehabilitation. The centre brings together nearly 40 medical and paramedical disciplines, as well as support groups.

“The naming of our trauma centre is an important milestone in the history of the MGH and also gives us an opportunity to recognize Dr. Mulder, an individual who personifies the values on which this institution was built,” said Mr. Jean-Guy Gourdeau, president and CEO of the Montreal General Hospital Foundation. “It is, at its heart, a celebration of the contribution Dr. Mulder, a man and surgeon who has, for the last 50 years, demonstrated exceptional professionalism, innovation, dedication and, above all, a sense of caring.”