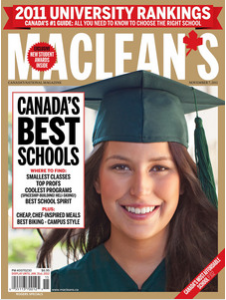 For the seventh year in a row, McGill University is ranked first in the medical-doctoral category in Maclean’s magazine’s annual issue devoted to Canadian universities.

“We are gratified by this recognition,” said McGill Principal and Vice-Chancellor Heather Munroe-Blum. “As McGill celebrates its 190th anniversary this year, we are determined to remain among the world’s leading universities, committed to excellence in teaching, research and service to communities in Quebec, Canada and internationally.

“These results reflect the remarkable quality and dedicated efforts of our faculty, students and staff.”

The Maclean’s ranking measures a number of aspects of a university’s operation. McGill was a leader in a number of areas, including: