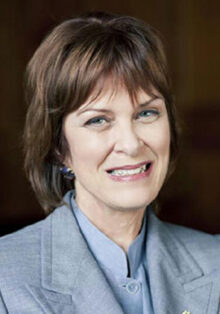 Professor Heather Munroe-Blum, Principal and Vice-Chancellor of McGill University, receives the Chief Executive Leadership Award from the Council for Advancement and Support of Education (CASE). The award is one of six major distinctions that will be presented by CASE International’s chapter for northeastern United States and Eastern Canada (District I), at an event to be held in Boston, Massachusetts.

The Chief Executive Leadership Award honours institutional leaders for outstanding contributions to their campus communities, for efforts in promoting public understanding of education, and for support of advancement at their campuses. It recognizes institutional heads, presidents, chancellors, or other campus chief executive officers who have demonstrated the ability to increase their institution’s stature in the community and to establish a positive image for their institution while leading it to even higher levels of success.

“One of the qualities this awards aims to recognize is an inspiring vision,” said Christine Tempesta, Director of Strategic Initiatives at the MIT Alumni Association and Chair of the CASE District I Board of Directors. “McGill’s successes over the past decade as one of the top-ranked universities in the world, as well as the innovative research and higher education public policy programs Prof. Munroe-Blum has contributed to in Canada and in her native Quebec, are compelling demonstrations of her vision for a highly performing university system.”

“McGill welcomes this prestigious recognition of Principal Munroe-Blum’s outstanding achievements over the past ten years,” added Stuart (Kip) Cobbett, Chair of McGill’s Board of Governors. “Thanks to exemplary engagement from its alumni, donors and volunteers, McGill has had a successful campaign that has led to a significant increase in graduate scholarships and student aid. McGill also proceeded with a renewal of its faculty with the hiring of more than 1,000 new professors and, with the support of a number of generous donors, established a number of new cutting-edge facilities on its historic campus.”

“I am moved at receiving this award from CASE, a most valuable and distinguished institution. CASE’s advocacy for philanthropy is vital as we promote the key role of universities in society,” said Prof. Munroe-Blum. “I accept this award with great pride on behalf of the remarkable people who make up the McGill community – our faculty, staff and students, and our engaged and generous alumni and volunteers in over 180 countries. Together, we are enabled to grow the impact and reach of our university and to expand our capacity to serve superbly communities and society, locally and around the world.”

About CASE International and CASE District I

Headquartered in Washington, D.C., with offices in London and Singapore, the Council for Advancement and Support of Education (CASE) is the professional organization for advancement professionals at all levels who work in alumni relations, communications, fundraising, marketing and other areas. CASE’s membership includes more than 3,400 colleges, universities, independent elementary and secondary schools, and educational associates in 61 countries around the world, making CASE one of the largest nonprofit education associations in terms of institutional membership. CASE serves more than 61,500 advancement professionals on the staffs of its member institutions and has more than 22,000 professional members on its roster.

CASE District I is the regional chapter of CASE International, and represents the northeastern United States and eastern Canada. Its member institutions and individuals are located in Connecticut, Maine, Massachusetts, New Hampshire, Vermont, and Rhode Island; New Brunswick, Newfoundland and Labrador, Nova Scotia, Quebec, and Prince Edward Island. The mission of CASE District I is to provide educational professionals in alumni relations, communications, and development with information, tools, and networking opportunities to advance both their careers and institutions.