Dr. Armen Parsyan, MD, PhD, MPH, a cancer-scientist and a physician specializing in general surgery at McGill University recently published a book, “Translation and Its Regulation in Cancer Biology and Medicine”.

The 700-page tome represents a two-year project commissioned to Dr. Parsyan by Springer, a world leader in biomedical publishing. For the first time anywhere, it assembles decades of information gleaned from research into the role of dysregulated protein synthesis, translation, in the development and progression of cancer. It uncovers fundamental biological mechanisms of cancer and discusses existing and novel strategies to diagnose and treat cancer. Various clinical aspects of cancer in relation to dysregulated protein synthesis and its control by signal transduction pathways are covered extensively as well.

Dr. Parsyan is a clinician and a scientist trained in clinical epidemiology and basic molecular sciences. “I was always curious about discovering new things and being intellectually stimulated. Science is one of the best fields for that,” says Dr. Parsyan of the origins of his interest in science. While pursuing a career in medicine appealed to Dr. Parsyan due to the immediacy of being able to see the results of your effort to help people, he has remained unwavering in the broader-term impact made possible through scientific discovery. “In surgery when somebody has a problem, you fix it! In science, it might take years to see the fruits of your work,” he says. “However the impact of that work might be tremendous. Medicine allows me to see results of my work at the individual level and science allows me to influence health at a much larger scale. I love medicine and surgery, but I also have  a special relationship with science.”

His broad research repertoire ranges from fundamental biochemical and genetic studies to clinical studies of various disease and malignant states. He trained as a medical doctor in Armenia, where he also completed training as a general surgeon and a doctorate in biology. He subsequently furthered his learning in clinical and molecular epidemiology at Boston and Harvard Universities, following which he moved to the United Kingdom, where he advanced his basic biomedical science expertise and received a PhD from the University of Cambridge, in parallel serving as a lecturer for epidemiology at the University of Cambridge Institute of Public Health.

Dr. Parsyan then moved to Montreal, where he continued his work and studies of molecular biology and cancer in the world-renowned laboratory of Professor Nahum Sonenberg at McGill. “Dr. Sonenberg’s lab has contributed significant knowledge to the mechanisms of protein synthesis and its role in cancer,” says Dr. Parsyan of the 2014 Wolf Prize recipient. “Working with Nahum was a unique experience. I studied in great places and always was blessed with having excellent mentors. What I admire in him most is that he always looks for quality and perfection in research. Hence his discoveries are outstanding and tested by time. I wish all scientists would have a similar approach to their work”.

Dr. Parsyan currently splits his time between performing clinical work, specializing in general surgery, and participating in various research projects related to cancer epidemiology and molecular biology. He is a recipient of prestigious awards and grants and has contributed important discoveries to basic and clinical research as well as to cancer research, reflected by his publications in very high impact scientific journals.

Due to Dr. Parsyan’s affiliation, the book comes under the aegis of the McGill University Department of Surgery, Division of General Surgery and contains over 30 chapters contributed by renowned 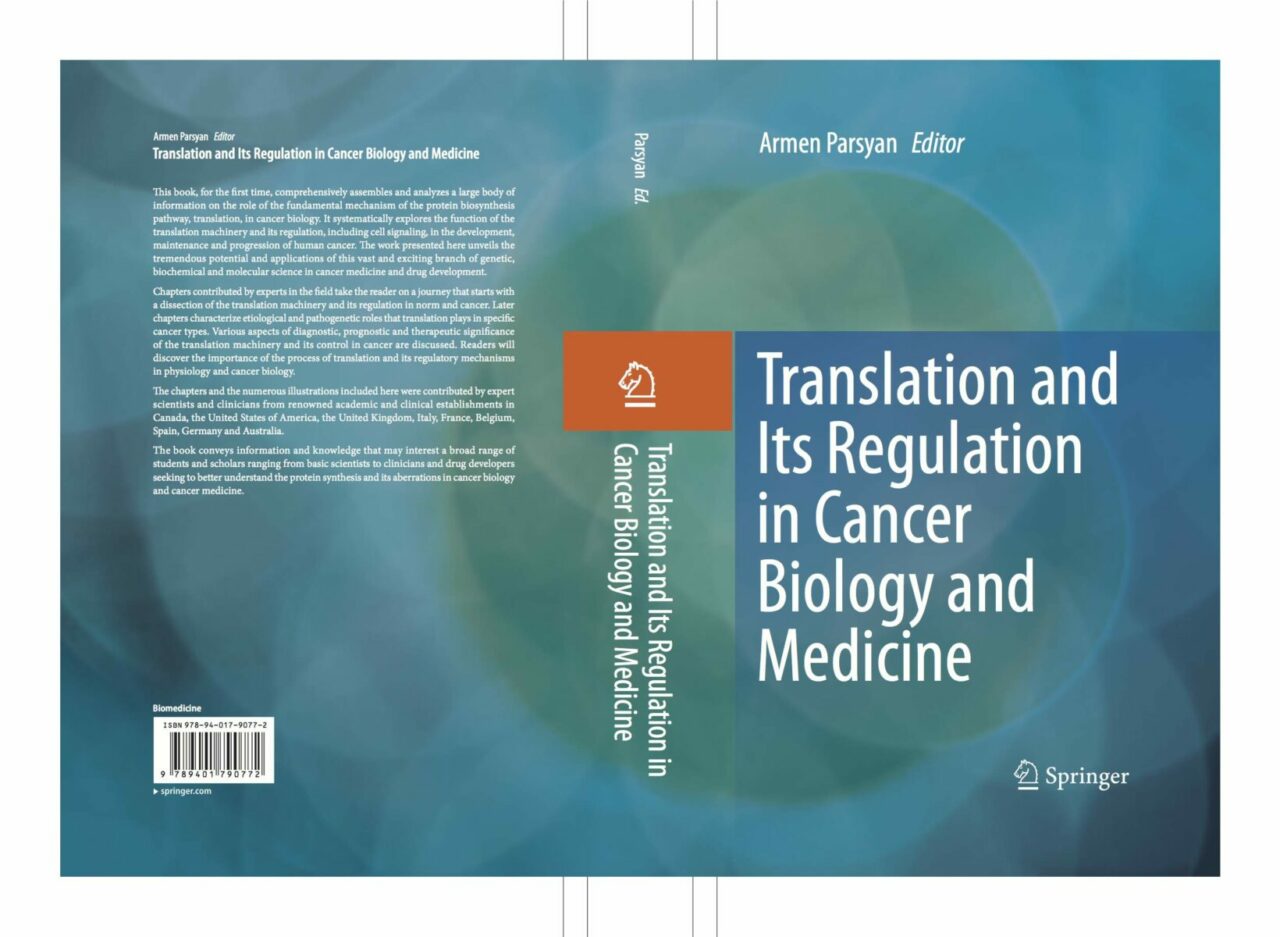 clinical and scientific experts representing some of the most renowned institutions from around the world, such as McGill, Harvard, and Brown Universities, UC Davis, UCSF, NIH US, and the MD Anderson Cancer Center, among others. Researchers that contributed to the book include McGill’s Professor Nahum Sonenberg , Harvard’s Pierre Paolo Pandolfi (Director of Cancer Center at Beth Israel Deaconess Medical Center and the Cancer Research Institute at BIDMC), Dr. Martine Piccart (President of the European Organisation for Research and Treatment of Cancer), and many others who have made significant contributions to cancer research and treatment. The book also involved numerous prominent clinicians and scientists at McGill, including Professors Sarkis Meterissian, MD, MSc (Surgical Oncology), Jerry Pelletier (Biochemistry and Goodman Cancer Center), Peter Metrakos, MD (Hepatobiliary Surgery), Lorenzo Ferri, MD, PhD (Thoracic Surgery) and others.

Dr. Parsyan dedicated this book to his outstanding academic mentors who supported his creativity and his way of thinking, with special mention of McGill Professors Nahum Sonenberg and Sarkis Meterissian. “There are people who enter the room and make it brighter just by their presence, due to their optimism, charisma, enthusiasm. I felt like this about all my mentors, especially Dr. Meterissian, my clinical mentor. He stands out through his ability to motivate and nurture the best aspects of my professional self. It is a privilege to learn from and work with people like him. Again, I am so thankful to my mentors, including those in the USA, the UK and Armenia who were brilliant as well, so I dedicated the book to them as a small return for their tremendous investment in perfecting my knowledge and practice.”

“Obviously, I am also very thankful to my family and friends who supported me in this endeavour,” says Dr. Parsyan, “and to the long beautiful winter season in Montreal that kept me indoors and focused on my writing.”

The information found within this book is likely to appeal to a wide range of audiences from students to scholars willing to learn and understand the molecular mechanism of translation and its role in cancer development and progression, as well as cancer diagnostics, treatment and development of novel anti-cancer therapeutics.