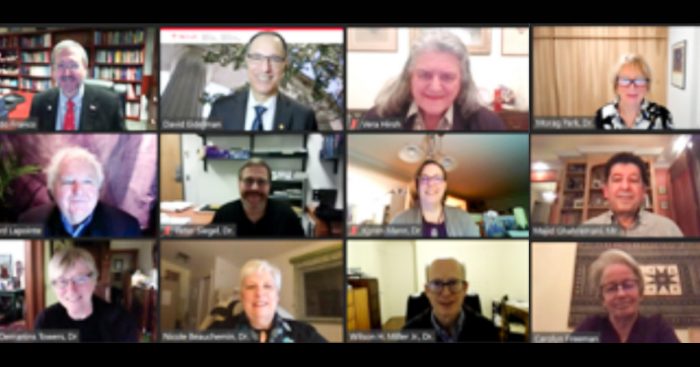 McGill’s Gerald Bronfman Department of Oncology, the first oncology department in Canada, celebrated its 30th anniversary earlier this month, albeit likely not in the way that anyone would have anticipated. Relaunched when the department was named in Gerald Bronfman’s honour in 2017, on December 1 Department members came together for the annual Distinguished Lecture and Awards Ceremony, held virtually like most events these days.

“In addition to being a celebration of the champions of the Oncology community, this event is also an opportunity to recognize the support of the Bronfman family, whose gifts permitted the establishment of our department 30 years ago,” said Dr. Eduardo Franco,  Chair of the Department, who served as the events co-host and moderator, together with Dr. David Eidelman, Vice-Principal (Health Affairs) and Dean of the Faculty of Medicine and Health Sciences.

With an important goal of the Department’s mission being to improve the quality of life of individuals with cancer throughout the disease trajectory, Dr. Bernard Lapointe was an apt selection as this year’s Distinguished Lecturer, the event’s first speaker after the opening remarks.

As a result of the pandemic, many events originally intended to take place this year to mark the anniversary have been postponed to yet to be determined dates in 2021. However, one event, originally scheduled for April 2020, was added to an expanded agenda for the December 1 event.

“This year, we had the privilege of partnering with the Canadian-Pakistan Affiliated Chamber of Trade and the South Asian Women Association of Canada to celebrate women in cancer education, research and care,” said Dr. Franco. “Thanks to this partnership, we had the opportunity to recognize three ‘Female Champions’ underscoring the extraordinary, career-long contributions of these award recipients.”

The event continued with the Department’s annual merit awards, selected by a standing awards committee representing all segments of the McGill oncology community. The awards are also an opportunity to recognize the nominators, who selflessly put their effort and persuasion to demonstrate the excellence of the work performed by their peers.

This year’s laureates were:

Last, but not least, Dr. Vera Hirsh was awarded the lifetime achievement award, selected by the Dean from a shortlist of candidates who have given decades of their lives to advance oncology education, research or clinical practice at McGill, nationally and internationally.

While the virtual event may not have been how anyone anticipated celebrating the department’s 30th anniversary, it was nevertheless a resounding success and a reminder of the tremendous strength of the department’s members. “Tonight’s distinguished speaker and award recipients epitomize all that this department stands for,” said Dr. Franco.

Congratulations to the laureates and to the Gerald Bronfman Department of Oncology!