The Osler Library of the History of Medicine at McGill, working in cooperation with the American Osler Society, recently helped initiate a pilot program entitled the William Osler Academy Awards. Maria Barrette, a second year medical student at McGill University, recently became the first recipient, for her paper titled Contrarian Contraception: Radical Feminism and The Birth Control Handbook in late 1960s Montréal. Maria has been invited to present her essay at the American Osler Society Meeting in Atlanta from April 9-12. Her essay was also awarded first place in the Pam and Rolando Del Maestro William Osler Medical Students Essay Awards during McGill’s Osler Day on October 26th 2016. Her essay and that of the other winners can be found on the Osler library website.

Before starting medical school, Maria completed an undergraduate degree in Arts and Science with a major in Biomedical science and a minor in Women’s studies. It was during these studies that her interest in women’s health blossomed and she has continued to develop this interest through her involvement in the Medical Student Society’s Equity Committee and through volunteer work at an organization serving immigrant women. Although early in her medical training, she aspires to work in the field of palliative care.

Maria initially became interested in participating in the essay contest as an outlet to focus her energy during a two month summer break and as an opportunity to learn from an expert in the field of Social Studies of Medicine. She knew that she wanted to write an essay on a topic related to feminism and medicine, believing that both fields share many similarities, especially in regard to their emphasis on social determinants and inequality, but she had intended to write about an entirely different subject related to the two.

“As I began my research I came across a timeline about the history of abortion laws in Canada,” says Maria, explaining how she ultimately landed on her winning topic. “At the line describing the year 1968, there was a note about the publishing of The Birth Control Handbook by undergraduate students at McGill University. I was inspired by the fact that this remarkable handbook had been written and published by undergraduate students at my very own university. It was a beautiful reminder that students are capable of initiating change on a large scale.”

Motivated to delve deeper into the handbook’s history and contents, Maria’s interest was piqued by the stunning photographs she found and the more research she did, the more she became interested in how it came to be published and how it reflected a defining moment in Canadian and Québécois history.

A highlight of McGill’s annual Osler Day, the Pam and Rolando Del Maestro William Osler Medical Students Essay Awards are made possible thanks to a generous endowment to the Osler Library of the History from Dr. 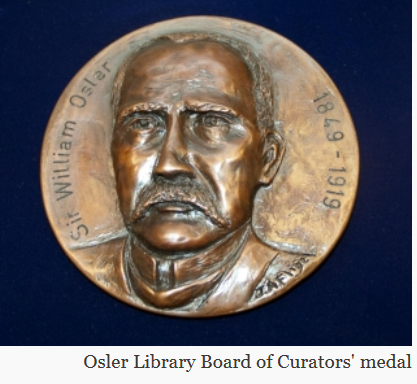 “Medicine has an enduring history,” notes Dr. Del Maestro. “Physicians, researchers, and healthcare professionals have endeavoured for millennia to improve the care of individuals afflicted with illness and disease. Their stories and their quests create an interwoven fabric that wraps around the many centuries of time. We are proud to support the medical students at McGill as they explore the historical, social, ethical, and humanistic side of medicine. Their investigations to unravel the past will hopefully lead to a further understanding of the role that medicine has and will play in the enhancement of the human condition.”

“I feel incredibly happy and honoured,” says Maria. “It means a great deal to me and I cannot thank my mentor George Weisz, the organizers, the judges, and Pam and Rolando Del Maestro enough for giving their time and energy to this. At a time when reproductive rights are a contested issue, I hope that those who read the essay will come away with an appreciation for the work of activists in this area. Most importantly, I hope they will feel as inspired as I did.”