I spent a day with a few social workers of Centre Jeunesse de l’Outaouais (Maniwaki office), which is considered as the Child Protection Services (CPS) of the Outaouais region. Their main mandate is to apply the Youth Protection Act of the Quebec civil code. Therefore, they have to deal with children who are, for example, neglected, physically or sexually abused.

Unlike CPS agencies of big cities like Montreal, the Maniwaki office covers a huge territory. Also, a particularity of their office is First Nations expertise. The director of the center told me that many outcomes improved when their office developed an expertise towards natives: their social workers were taught to become more culturally aware (for example, aware of residential school, cultural differences etc…)

Part of the job of these social workers is to monitor the progress of parents, whose children are taken away. Therefore, they have to meet the clients regularly. In fact, some of their clients are located in Rapid Lake. And so, I tagged along with three social workers from the Centre Jeunesse to Rapid Lake, an Algonquin reserve.

As a rule of the thumb, the more northern a First Nations community is, the more it is isolated and the worse are the living conditions. Rapid Lake, however, is not that isolated. It is located close to the 117 highway, between Val d’Or and Mont-Laurier. Once we were there, we had to drive another six km of dirt road before arriving in the heart of Rapid Lake, a very small community that comprises of 660 band members, and according to what I’ve been told, 300 people live there. They have one general store where fresh produce is way more expensive than junk food, a police station that looks like a shack (apparently, some people tried to burn it down), an elementary school (there is no high school there) and a nursing station.

It was quite a shock for me. Several things were just eye-popping:

– There are no paved roads. Roads in the community are all dirt roads.

– Houses are not well maintained. There are planks missing from the walls and roofs are often old. I’ve been told that many houses are infested with mold from the inside, and overcrowding is a problem.

– The few people we saw there were poorly dressed: dirty and very old clothing.

– There is garbage everywhere.

– There are dogs everywhere, hungry and begging for food.

In short, the whole place looks like a big mess. But unfortunately, such is the reality of many native communities across Canada.

Without losing any time, two social workers went to meet their clients are their homes, while I stayed with M, the third social worker, in the nursing station, where I got the opportunity to have a look around and to meet the nurses. Currently, there are four nurses who work there and they are not from the community. When I told them I was a medical student, their eyes gleamed, hoping I would stay and help them. I think they could really use a hand, since they are obviously understaffed.

A bit later, a couple came to the clinic to meet M. They were M’s clients. In their case, they have a child that was taken away for a year, placed in KZ in the meantime.

Briefly, when children have to be taken away by the CPS, the children will be placed in a foster home for a certain duration of time which can vary from six months to two years, depending on the age of the child. In the meantime, the parents have to participate in certain programs such as detox and parenting skills courses. The social worker’s job is therefore to monitor the progress of the parents.

In the case of this couple, their child was taken by the CPS for a certain period of time. Their encounter with M was very touching. The mother cried, because she is in pain and misses her child. The father misses his child badly too, and said that he was improving on the issues he had (I’m being vague on purpose to protect the client’s confidentiality), and he’s ready to have their child back.

People from KZ told me there are many problems in Rapid Lake: drug and alcohol abuse, family violence, high prevalence of obesity and diabetes, poor parenting skills, poor literacy skills, rampant poverty, extreme level of unemployment etc… One can only wonder what led to such a disaster. Looking back at a dark page of Canadian history, the vast majority of natives were taken away to residential schools at a young age where they were taught Western ways, to forget and despise their former cultures and identities. All this led to people who were traumatized at a young age, who became adults with poor life skills. Unfortunately, this vicious cycle repeats itself and undermines the well-being of many native communities up to this day (1).

How to fix all this? I don’t know for sure. It is a complicated problem beyond my understanding. Part of the answer would be to implement systemic level interventions related to the social determinants of health, including cultural traditions, economic security, food security, and housing status. Only then, sustainable progress can be made (2).

I do hope that native communities like Rapid Lake will know a better day. As for me, it reminded me that third world living conditions do exist in Canada.

Frankly, I had no idea what I got myself into. Being a huge fan of Google Street View, I searched for Kitigan Zibi, but to my disappointment, Google failed me. All I knew about this place was that it is located just beside Maniwaki, and that Algonquins live there. And so, about 4 hours later, after a pit stop at Mont-Laurier and a speeding ticket from the SQ, I made it safe and sound at Kitigan Zibi (I’ll refern to it as KZ from now on).

While looking for the KZ Health Centre, I quickly noticed how beautiful and spacious this reserve is. I have previously worked at Waswanipi, a Cree aboriginal reserve, as a substitute teacher for 6 months. Compared to Waswanipi, many differences struck my eyes right away:

– There’s a Maxi’s in Maniwaki. Unlike Waswanipi, no need to drive 2 hours to Chibougamau for groceries!

– Houses are all well maintained

– Lawns are green, mown and weeded

– Roads are paved across the whole town

– There are no unchained dogs wandering everywhere

A while after, I finally found my way to the health centre, and Shirley, a nurse there and coordinator of my internship greeted me there.

She quickly made me realize a few more things:

– Maniwaki is a separate entity and it is mainly “white” and French. Around 4000 people live there and KZ Algonquins refer it as “the town” 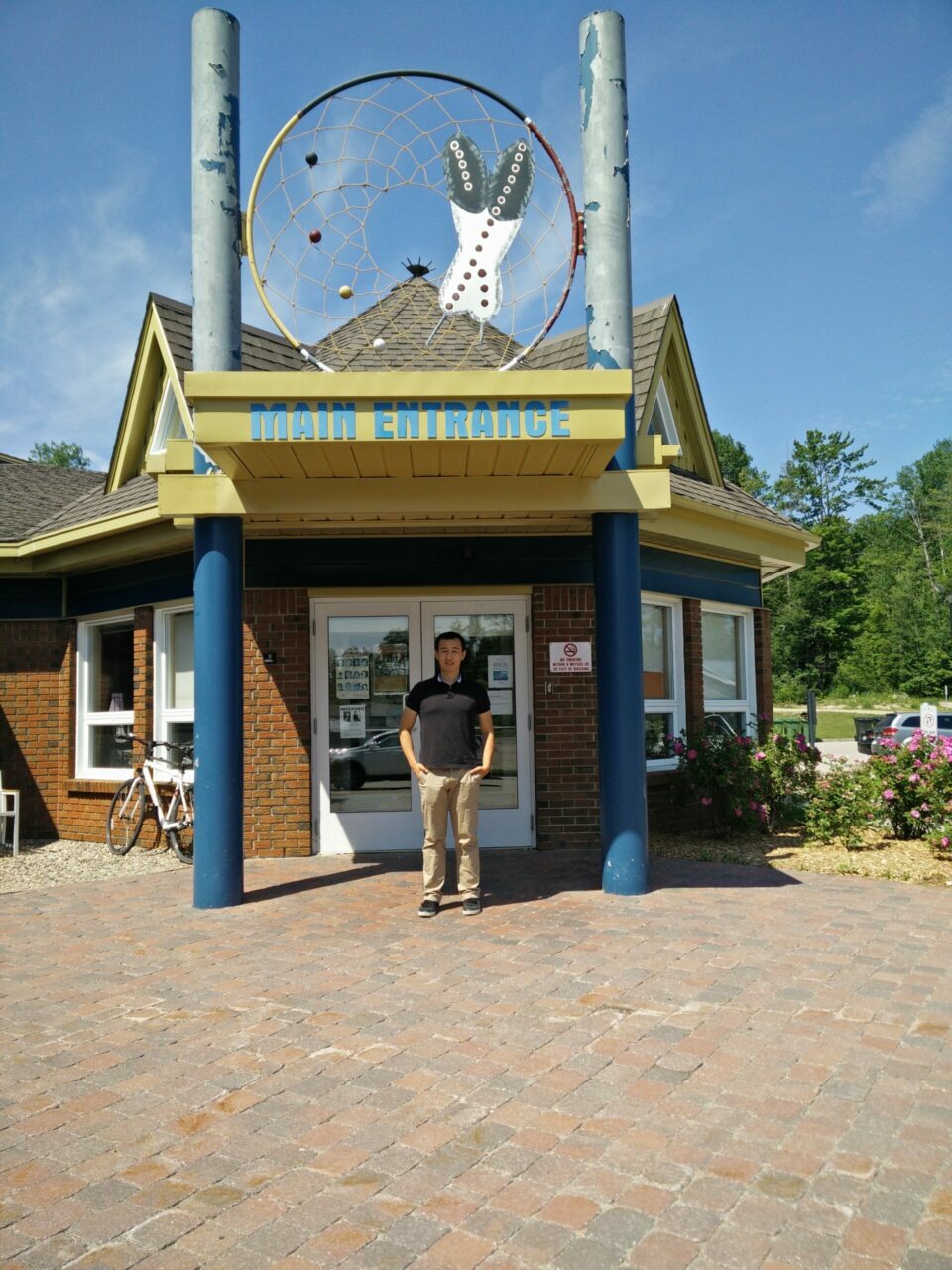 This blog will be about my experience in Kitigan Zibi, an Algonquin reserve, during the month of July. I will be here as part of an internship organized by Dr Kent Saylor and Yves Sioui, called the Preclinical Internship in First Nations/Inuit Communities. Therefore, rather than just purely a medical internship that would somewhat look like a clinical rotation, I will get the chance to discover the Algonquin people’s culture, a bit of their history, and about the struggles they face.