Trial to test topical gel that inhibits the spread of infection 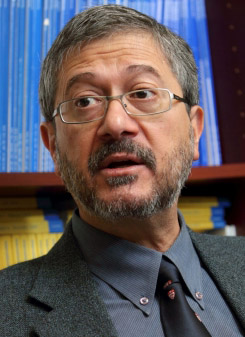 A new study by McGill University’s Division of Cancer Epidemiology will test a revolutionary way of preventing the transmission of the human papillomavirus (HPV) through the use of a topical gel applied during sexual activity.

The study – called CATCH, an acronym for Carrageenan-gel Against Transmission of Cervical HPV – is a double-blind randomized controlled trial involving over 450 women, each of whom will receive either an active gel containing a specific type of sea algae extract commonly referred to as carrageenan or a placebo gel.  The research team is led by Dr. Eduardo Franco, Director of the Division of Cancer Epidemiology, and the study will be coordinated by Joseph Tota, a PhD candidate.

“Positive results from the CATCH study would be the start of an entirely new way of approaching cancer prevention,” explained Franco. “Imagine the impact if women can protect themselves from HPV infection and the risk of cervical cancer through the simple application of a medicinal gel packaged as a personal lubricant. Each year, 250,000 women die from cervical cancer and many more face painful and expensive treatments of pre-cancerous and cancerous lesions. This approach could substantially reduce these frightful numbers.”

To date, the tools to fight the spread of HPV have been limited. Vaccines have been recently introduced but they do not provide protection against all cancer-causing HPV types or for women already infected with HPV. Moreover, vaccines are too expensive for many regions of the world, which happen to be those with the most severe cervical cancer burden. Unlike with other sexually transmitted diseases, studies have shown that condoms are not always effective at preventing infection. A topical product that a couple can apply before and during sexual contact would solve many of these problems.

The concept of a topical gel as an infection barrier gained credibility after studies performed by the National Cancer Institute in Bethesda, Maryland, indicated that carrageenan, a type of sulfated polysaccharide, was a potent inhibitor of HPV infection. Dr. John Schiller and his team at the Laboratory of Cellular Oncology conducted studies in cultured cells and in animal models. They discovered that the infection-inhibiting characteristics of carrageenan worked across a broad range of HPV types, including those that are known carcinogens. For the CATCH study, Dr. Franco and colleagues selected the product with the strongest inhibitory effect against HPV, based on Dr. Schiller’s testing.

“I am excited that Dr. Franco, McGill University and the Canadian Institutes of Health Research are moving our initial research from laboratory to human trials,” stated Dr. Schiller. “Our findings indicate that a carrageenan-gel could function as a broad-spectrum topical microbicide targeting sexually transmitted HPVs.  Such a gel would be an excellent adjunct to vaccination programs by addressing the needs of populations where vaccination is not an option.”

The U.S. Centers for Disease Control considers HPV the most common sexually transmitted disease in the world. A 2010 McGill study called HITCH (HPV Infection and Transmission in Couples through Heterosexual activity) found more than half (56 per cent) of young adults in a new sexual relationship were infected with HPV. Of those, nearly half (44 per cent) were infected with an HPV type that causes cancer. The World Health Organization (WHO) estimates that 529,828 women are diagnosed with cervical cancer and 275,128 die from the disease annually – making it the 2nd most frequent cancer among 15 to 44-year-old women.

HPV is transmitted through sexual contact and persistent infections by specific types of HPV are the cause of cervical cancer. HPV infection may also cause cancers of the anus, vulva, vagina, penis, and of the mouth and throat. WHO estimates 15-20 per cent of the 400,000 new cases of head/neck cancers reported each year are associated with HPV, with growing evidence linking these to the practice of oral sex.

The CATCH study will recruit 465 female volunteers and each will be supplied with either the treatment gel that contains carrageenan, or the placebo gel. The volunteers will use the gels whenever they are in intimate situations.  During their one-year follow-up, the women will visit designated clinics for monitoring of HPV infection rates.  Women interested in participating should contact Ms. Allita Rodrigues at catch.study@mcgill.ca for more information.

The study is funded by the Canadian Institutes of Health Research (CIHR).