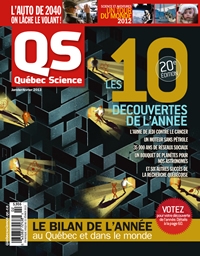 McGill researchers led two of the top 10 discoveries of the year; grab top spot in ranking over 20 years

The achievements of McGill researchers were again recognized in Québec Science’s annual selection of the top discoveries, with two McGill-led breakthroughs making the top 10 list for 2012. Moreover, McGill ranked first among all Quebec universities for the number of discoveries featured in the magazine’s annual roundup since it was created 20 years ago.

Among the most important discoveries made in Quebec last year, the work of  Dr. Lucy Gilbert, of the McGill University Health Centre and the departments of Obstetrics and Gynecology and Oncology at the Faculty of Medicine, attracted considerable attention. The team led by Dr. Gilbert established that the deadliest type of ovarian cancer often starts in the Fallopian tubes rather than in the ovaries. This discovery could revolutionize the way the disease is diagnosed and treated.

The other McGill scientific breakthrough that was included in Québec Science’s top 10 list was led by Prof. George Haller, of the Department of Mechanical Engineering, and Prof. Josefina Olascoaga of the University of Miami. The combined work of the two researchers means that mathematical methods could help manage environmental disasters by predicting the movement of oil in the ocean or ash in the air following a volcanic explosion, for example.

The special issue of Québec Science on the top discoveries of 2012 – now on newsstands – also includes a ranking based on the lists of the top discoveries from the past 20 years. Overall, 43.5* breakthroughs achieved by McGill-led teams were selected by the magazine over the years, placing McGill in the top position among Quebec universities, with 21.8 per cent of all discoveries.

The public is now invited to vote for THE top discovery of 2012 at: http://www.quebecscience.qc.ca/les-10-decouvertes-2012/decouverte2012

(*Universities are awarded a fraction of a point for discoveries achieved by a team of researchers from more than one university.)