Dr. Wayne Gulliver, who graduated from McGill University’s Dermatology program in 1989, was recently presented the Albert Neisser Lecture at the Wroclaw Opera House during the 8th European Hidradenitis Suppurativa Foundation Conference, February 6, 2019 in Warsaw, Poland. He is the first Canadian to receive this award.

The Albert Neisser Lectureship is awarded to dermatologists who have made significant clinical and research contributions to dermatology.  Dr. Gulliver who is professor of Medicine and Dermatology, Memorial University of Newfoundland & Labrador was honoured for his pioneering work in the use of biologics in the treatment of hidradenitis suppurativa and his landmark publication on evidence-based therapy in the treatment of hidradenitis suppurativa. 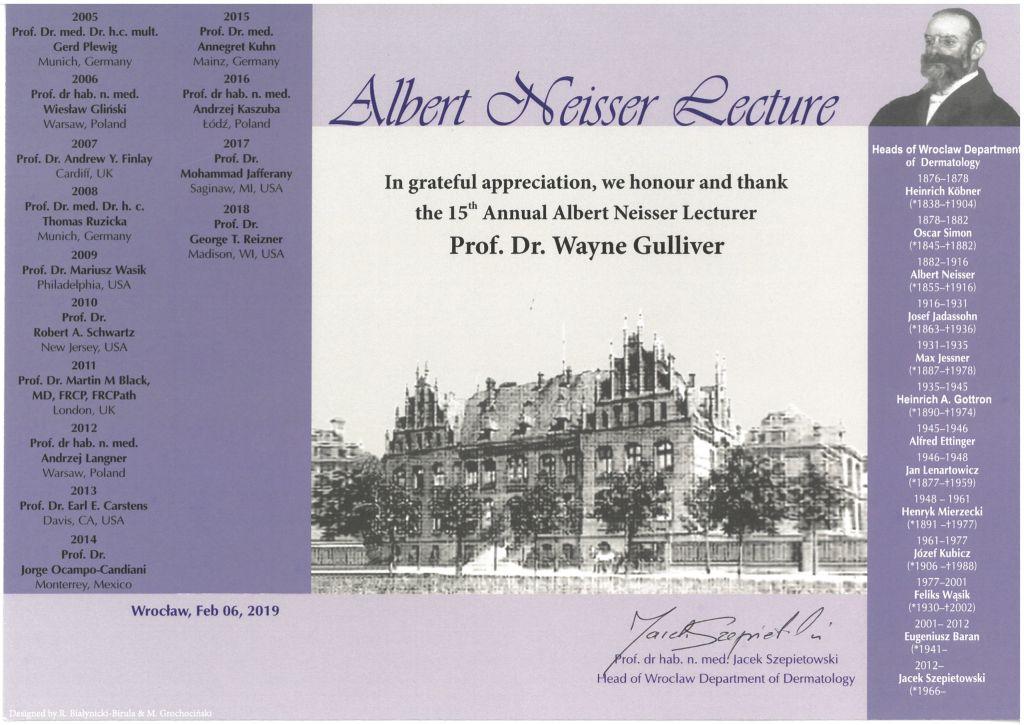 The Albert Neisser Lectureship has been awarded since 2005 and is given to honour Prof. Dr. Albert Neisser who was appointed professor extraordinarius by the University of Wroclaw Medical School at the age of 29, in 1882.  Dr. Neisser’s accomplishments include his work on discovering the pathogen of leprosy as well as STDs.  He was also active in the field of public health and clinical research. Some notable recipients include Prof. Dr. Andrew Y. Finlay, Cardiff, UK and Prof. Dr. med. Dr. h.c. Thomas Ruzicka, Munich, Germany.

Dr. Wayne Gulliver is a Dermatologist experienced as a clinician, educator, administrator, clinical and basic science researcher.  He has been in clinical practice for nearly 30 years and has supervised over 250 clinical trials covering many aspects of dermatology with the focus in genetics, psoriasis, wound care, virology and hidradenitis suppurativa.  He has more than 100 published papers authored or co-authored, as well as more than 200 abstracts authored or co-authored.