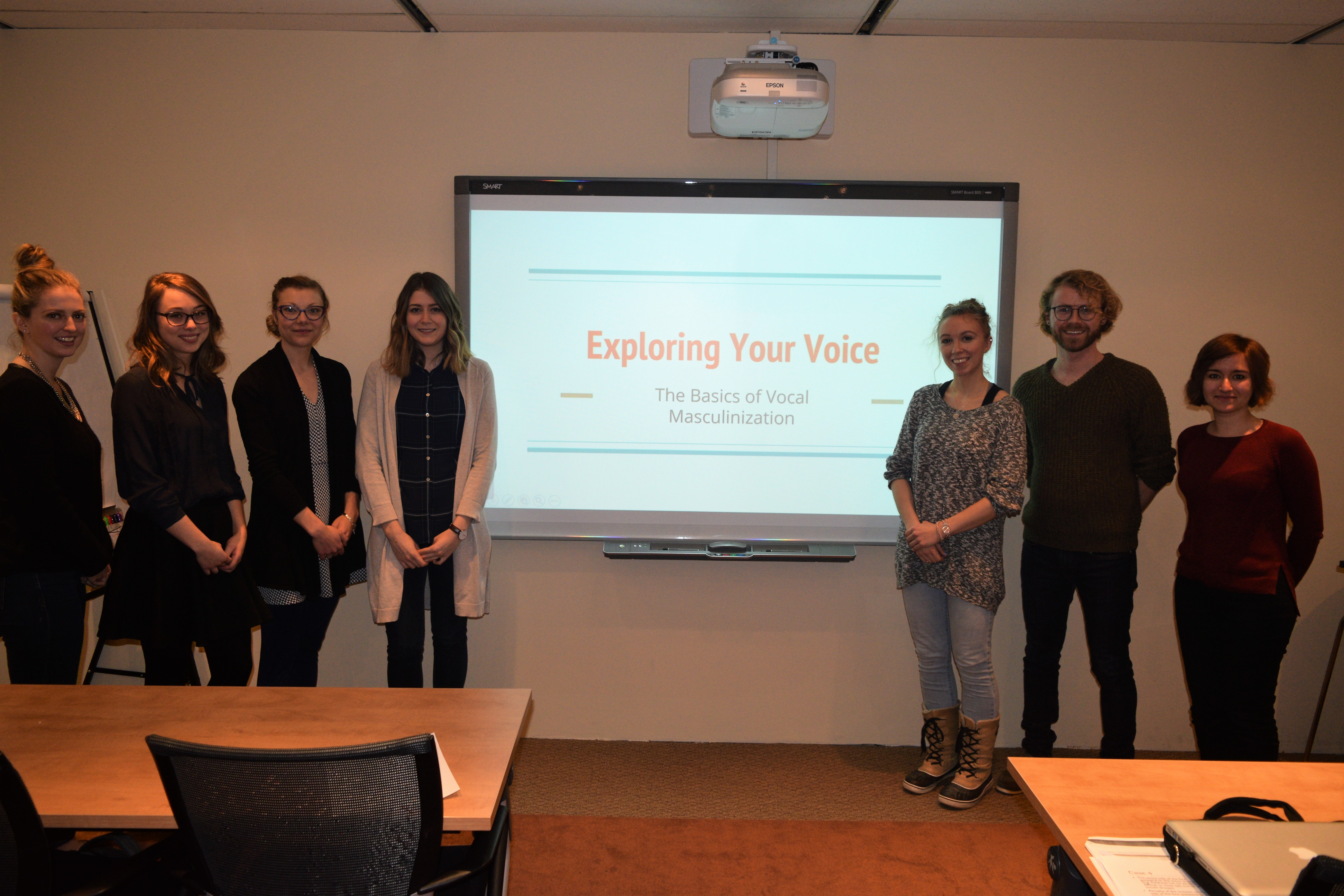 The product of a collaboration between the McGill University Faculty of Medicine’s School of Communication Sciences and Disorders, McGill Student Health Services and McGill’s Social Equity and Diversity Education (SEDE) Office, voice and communication training workshops developed for the transgender student population will be held on November 30 and December 7.

“When I began as the interim Director of Student Health Services in December 2015, I realized very quickly that there existed a big gap in the care that we’re providing to our trans and gender non-conforming student population,” explains Dr. Hashana Perera, who is now permanent Director of Student Health Services at McGill and a graduate of the McGill Medicine program.  “So when I was looking into how we would fill that gap and how we can provide appropriate care, I wanted to do something that was comprehensive.”

Dr. Perera reached out to Tynan Jarrett, Equity Education Advisor at McGill’s SEDE Office, and the two began discussions as to what could be done to support a community that faces unique challenges. Voice training is sometimes desired by trans and non-binary people in order to feminize or masculinize speech, and as they pondered what to do, the duo realized that offering speech language pathology to McGill’s trans community was potentially a gap in services that they could help to fill.. By coincidence, Tynan was meeting with Kelly Root, Coordinator of Clinical Education at the School of Communication Sciences and Disorders later that week, and Kelly pointed the pair in the direction of Dr. Nicole Li-Jessen, Assistant Professor at the School and Canada Research Chair in Personalized Medicine of Voice Disorders, who enthusiastically jumped at the opportunity.

“Transgender voice is still new in speech language pathology, but we have really started to focus on this population in the last five years and have a much better idea now of how to help them,” notes Dr. Li-Jessen, who tasked students in her voice disorder class to develop and deliver the voice workshops for transgender populations as both a class assignment and part of their community outreach.

Each hour-long workshop includes a combination of presentations that introduce the anatomical structure of the voice and how it is important in terms of gender identity as well as small group exercises and vocal exercises to help with their voice transition.

“The voice work is like learning a new language in this case,” explains Dr. Li-Jessen. “It’s a long process. You have to do exercises and you have to realize that it’s not like  surgery that can change your voice in one day.”

The feedback from the first workshops was positive on all fronts. “We got feedback the day of the workshops from each of the participants and it was positive,” says Tynan. “People really found it informative and got quite a bit out of it. On top of that, the students who presented put so much work into it. They were so enthusiastic and excitedn and they kept talking about how happy they were to be learning about this. So in addition to meeting a need among trans students, we have the added benefit of ensuring that this segment of the next generation of speech language pathologists are equipped with the knowledge and skills they need to serve trans populations in a meaningful and respectful way. ”

“These workshops are really a great opportunity, a win-win situation for our speech-language pathology students and for the participants for the group as well,” notes Dr. Li-Jessen.

Developing a community of support

Tynan says that the landscape now is very different from what it was ten years ago in terms of the space in society for discussions about gender-non-binary people or transsexual, transgender people. “We see for example more representation of trans people in the media and we see a community that is increasingly asserting its right to exist and thrive – and this kind of thing creates more space among youth to reflect on their own gender. So we actually see a lot more kids transitioning than ever before, and also parents, families, schools who are supportive of these kids.”

Based on survey data culled by Student Health Services, Dr. Perera says that about 1.5% of McGill students identify as trans or gender non-conforming. “Even as a base number that’s a significant number of students and these numbers will increase in the future,” explains Dr. Perera. “We have to make sure that we’re set-up well to provide care and the voice and communication training workshops are an important element to that.”