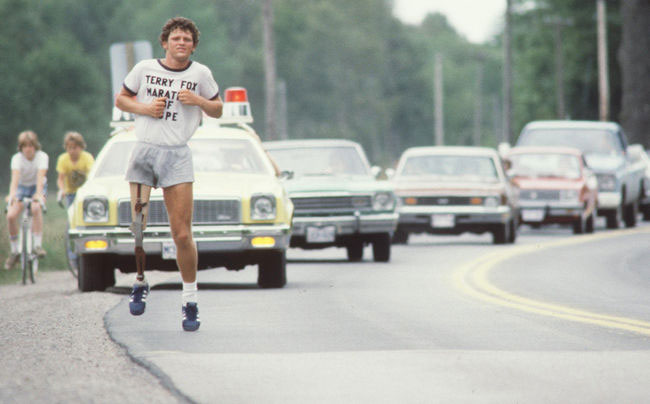 Sunday, Sept 20th, 2015 is the 35th anniversary of Terry Fox’s Marathon of Hope and researchers at McGill’s Rosalind and Morris Goodman Cancer Research Centre (GCRC) are setting their fundraising goal high this year with the help of a local business.

In 1980, Terry Fox embarked on his Marathon of Hope to raise crucial funds for cancer research. The Terry Fox Foundation now organizes annual runs all across Canada, raising close to $700 million and funding 1212 innovative cancer research projects to date. It is one of the largest non-governmental funders of cancer research in the country.

Among the recipients of Terry Fox funding grants are many of the GCRC researchers.

Over the past 2 years, the student-led GCRC Foxtrotters team has raised over $12,000 for the Terry Fox Run. Hoping to do even better this year, they reached out to the community.

“Many of us grew up with Terry Fox Runs,” says Vanessa Sung, a student organizer. “Now as cancer researchers, we get to see firsthand the impact of the funds raised by the Terry Fox Runs and why it’s important to do our part. As a team of mainly students, we’ve done well in the past couple of years fundraising on our own, but we wanted to take it a step further. We are thrilled that the Montreal restaurant Grillado’s Poulet Grillé Peri Peri  has so generously agreed to partner with us this year.

Grillado’s restaurant has pledged to match up to $5000 of GCRC’s fundraised dollars, with the goal of helping the Centre surpass $12,000. Mohammad Mughal, co-owner of the newly opened restaurant, says it was an easy decision.

“We all have family and friends affected by cancer, it touches everyone in some way. So when the GCRC students approached us, we didn’t hesitate. We’re proud to be able to work with researchers from our community and join in the fight against this disease.”

The GCRC Foxtrotters have now more than halfway reached their goal. Fundraising continues through community outreach and their ever-popular ice cream and bake sales. You can help them reach their fundraising goal of surpassing $12,000 by donating online at www.terryfox.ca/gcrc.

The Terry Fox Run takes place at the Old Port of Montreal on Sunday, Sept 20 at 9am.