Montreal, July 13, 2014 — An international research project, led by the Research Institute of the McGill University Health Centre (RI-MUHC) in Montreal, reports that a new oral 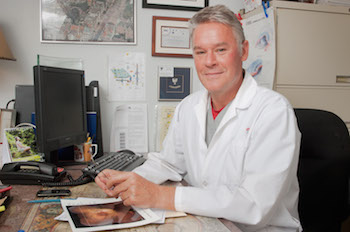 medication is showing significant progress in restoring vision to patients with Leber congenital amaurosis (LCA). Until now, this inherited retinal disease that causes visual impairment ranging from reduced vision to complete blindness, has remained untreatable. The study is published today in the scientific journal The Lancet.

“This is the first time that an oral drug has improved the visual function of blind patients with LCA,” says the study’s lead author, Dr. Robert Koenekoop, who is director of the McGill Ocular Genetics Laboratory at The Montreal Children’s Hospital of the MUHC, and a Professor of Human Genetics, Paediatric Surgery and Ophthalmology at McGill University. “It is giving hope to many patients who suffer from this devastating retinal degeneration.”

Jörgen, a 44-year-old Swede who was born with LCA, has long dreamed of a treatment for his blindness. He was enrolled in the MUHC study, along with others from North America, Europe, China and Brazil, and showed the most significant improvements of all the participants. “The drug changed my life,” he says. “My visual acuity and visual field increased significantly. I can now go by myself into a shopping center or to the airport and even take the metro, which were unthinkable for me before. I hope many people can access the drug in a near future.”

The study involved 14 participants from around the world with LCA ranging in age from 6 to 38 years old. Their blindness was caused by either mutations in the genes RPE65 or LRAT, leading to a serious defect in the retinoid cycle. The retinoid cycle is one of the most important cycles in the human retina because it produces a molecule called 11-cis retinal which has the special capacity to capture light and initiate vision. Patients with RPE65 or LRAT mutations cannot produce this crucial molecule thus the retinal cells cannot create vision, and slowly die.

“By giving patients with RPE65 or LRAT mutations an oral retinoid intermediate (QLT091001) most patients’ vision improved rapidly. We discovered that a certain portion of the retinal cells that were not working because of the lack of 11-cis retinal could be woken up,” explains Dr. Koenekoop. “Contrary to what was previously thought, children with LCA and defects in RPE65 or LRAT are not born with dead retinal cells; the cells can simply go dormant, and they can remain dormant for years before they eventually die. The oral drug we tested awakened these cells and allowed patients to see.”

Ten out of the 14 patients expanded their visual fields; others improved their visual acuity. The research team performed special brain scans of the visual cortex, which showed marked improvements in brain activities in patients who also improved in field size and acuity. More research will now be conducted to learn more about the retinal function in blind people in relation to dosage and methodology.

“This revolutionary breakthrough to restore sight in children who are blind shows that investing in vision research over the long-term really can make miracles happen,” said Sharon Colle, President and CEO of The Foundation Fighting Blindness, the largest charity funding sight-saving research in Canada

Research Institute of the MUHC: www.rimuhc.ca