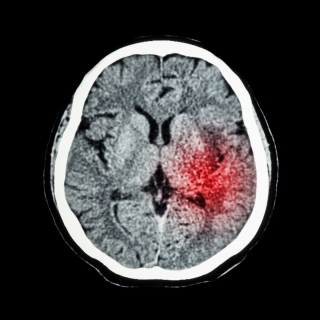 Every ten minutes, someone in Canada suffers a stroke. Strokes kill 14,000 Canadians each year, making stroke the third leading cause of death in this country.

The Montreal Neurological Institute and Hospital (The Neuro) hopes to increase public awareness about the dangers of stroke by marking Stroke Month. People who learn about the causes of stroke can take measures to reduce their chances of having a stroke.

What is a stroke?

Transient Ischemic Attacks (TIA) are negligible strokes that nonetheless signal a warning.  Someone who has had a TIA is five times more likely to have a stroke within two years.

Disrupted blood flow can cause brain damage, the extent of which depends on the brain region affected and for how long. For this reason, it is essential that a stroke victim receive medical treatment as soon as possible.  In cases of ischemic stroke, if a victim can reach a hospital within three or four hours, doctors can administer drugs to limit significantly the extent of any potential brain damage.

People should be aware of the main warning signs of stroke:  weakness, speech or vision problems, severe headaches, dizziness that leads to disequilibrium. If these symptoms occur, people should consider seeing a doctor.

The greatest risk factor for stroke is high blood pressure (hypertension), which affects one out of five Canadians.

Stroke and the Neuro

The Neuro provides both inpatient and outpatient treatment for stroke.

Dr. Donatella Tampieri directs The Neuro’s Department of Diagnostic and Interventional Neuroradiology. She is a leading authority and practitioner of interventional neuroradiology, which includes acute stroke treatment, brain revascularization, endovascular treatment of intracranial aneurysm, arterio-venous malformations, dural arterio-venous fistula and pre-operatory embolization of tumours. Much of Dr. Tampieri’s clinical activity is devoted to treating back and cervical spine pain such as nerve and facets block, epidural injections, and vertebroplasty.

Dr. Jeanne Teitelbaum, a neurologist and neuro-intensivist, is Co-Director of Stroke Service at The Neuro. Her specialties are acute stroke treatment and neurological critical care. She is also the president of the Canadian Neurological Sciences Federation and the program director for Neurocritical Care.

Dr. Maria del Pilar Cortes Nino is a NeuroInterventional and Diagnostic Radiologist. She is assistant professor at McGill University for the departments of Radiology, Neurology and Neurosurgery. She performs diagnosis and endovascular treatment of vascular lesions including Stroke. She also performs percutaneous spinal procedures for chronic pain.

The Neuro opened its special Receiving Area (RA) for stroke patients in February, 2015, as a consequence of the Royal Victoria Hospital’s move to the McGill University Health Centre (MUHC) at the Glen Yards site. The RA took over treatment of stroke patients in central Montreal who were previously treated at the RVH. The Neuro’s RA, which is adjacent to the Intensive Care Unit, is the second Tertiary Stroke Care centre in Montreal and the fourth in the province of Quebec.

Between April 1, 2015 and May 1, 2016, the RA handled more than 940 patient visits. About one out of five visits required treatment for stroke. Patients were directed to the RA by doctors and ambulance attendants. As a policy, walk-in patients are not accepted, but in the past year, the RA nevertheless treated a few emergency cases off the street.

When a patient arrives, the RA staff quickly administers medical exams and tests. If a stroke is diagnosed, the patient remains under treatment in the RA until transfer to a longer-term hospital bed.

Although the RA staff administers rapid care, the RA is not an Emergency Room.

“There’s still a misunderstanding among the public about the RA’s purpose,” says Siva Moonsamy, Managing Nurse at The Neuro’s Intensive Care Unit. “Even family doctors outside the MUHC will sometimes tell their patients to go to The Neuro’s Emergency unit. We don’t have an ER here. We tell them to go to a hospital with an ER.”

Following its opening, the RA continued to adjust its services and facilities to ensure the most efficient and effective response to stroke cases.

“We installed new cardiac monitors according to the MUHC’s plan,” says Moonsamy. “We readjusted the ventilation system to conform to the health ministry’s norms for controlling airborne infectious diseases. And the elevator was set up to allow ambulance attendants to take control and arrive directly to the Fourth Floor ICU, which is a restricted area.”

Although a high percentage of RA cases are non-stroke patients who occasionally show stroke-like symptoms, the RA staff must remain vigilant and prepared.

The Stroke Centre received one high-profile patient this year. On April 6, 2016, Senator Jacques Demers, a former coach of the Montreal Canadiens, was brought to the Montreal Neurological Institute and Hospital after suffering a stroke.

As a diagnostician of stroke, radiologist Dr. Denis Melançon had few peers. For more than 40 years before his death in January, 2016, Dr. Melançon did outstanding work at The Neuro. He brought his diagnostic acumen to the analysis of innumerable brain scans; helped to pioneer the use of CT and MR scanning; and taught generations of medical residents who went on to radiologist careers throughout the world. As a historian of radiology, Dr. Melançon organized a major exhibition devoted to the history of X-rays at Montreal’s McCord Museum and at Ottawa’s Science and Technology Museum. Dr. Melançon was Director of the Radiology Department from 1995-1999, and served as president of both the Association des radiologistes du Québec and the Canadian Association of Neuroradiology. In his honour, The Neuro in 2008 introduced the annual Denis Melançon Lecture, which he attended in October, 2015, a few months before his death.

The Montreal Neurological Institute and Hospital – The Neuro—is a world-leading destination for brain research and advanced patient care. Since its founding in 1934 by renowned neurosurgeon Dr. Wilder Penfield, The Neuro has grown to be the largest specialized neuroscience research and clinical centre in Canada, and one of the largest in the world. The seamless integration of research, patient care, and training of the world’s top minds make The Neuro uniquely positioned to have a significant impact on the understanding and treatment of nervous system disorders. The Montreal Neurological Institute is a McGill University research and teaching institute. The Montreal Neurological Hospital is part of the Neuroscience Mission of the McGill University Health Centre. For more information, please visit www.theneuro.ca