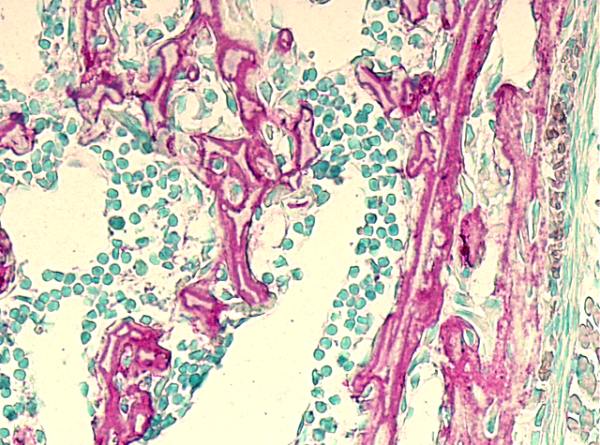 A new study by Multiple Sclerosis researchers at three leading Canadian centres addresses why bone marrow transplantation (BMT) has positive results in patients with particularly aggressive forms of MS.  The transplantation treatment, which is performed as part of a clinical trial and carries potentially serious risks, virtually stops all new relapsing activity as observed upon clinical examination and brain MRI scans.  The study reveals how the immune system changes as a result of the transplantation.  Specifically, a sub-set of T cells in the immune system known as Th17 cells, have a substantially diminished function following the treatment. The finding to be published in the upcoming issue of Annals of Neurology and currently in the early online version, provides important insight into how and why BMT treatment works as well as how relapses may develop in MS.

“Our study examined why patients essentially stop having relapses and new brain lesions after the bone marrow transplant treatment, which involves ablative chemotherapy followed by stem cell transplantation using the patient’s own cells,” said Prof. Amit Bar-Or, the principle investigator of the study, who is a neurologist and MS researcher at The Montreal Neurological Institute and Hospital -The Neuro, McGill University, and Director of The Neuro’s Experimental Therapeutics Program. “We discovered differences between the immune responses of these patients before and after treatment, which point to a particular type of immune response as the potential perpetrator of relapses in MS.”

“Although the immune system that re-emerges in these patients from their stem cells is generally intact, we identified a selectively diminished capacity of their Th17 immune responses following therapy – which could explain the lack of new MS disease activity. In untreated patients, these Th17 cells may be particularly important in breaching the blood-brain-barrier, which normally protects the central nervous system. This interaction of Th17 cells with the blood-brain barrier can facilitate subsequent invasion of other immune cells such as Th1 cells, which are thought to also contribute to brain cell injury.

Twenty-four patients participated in the overall clinical trial as part of the ‘Canadian MS BMT’ clinical trial, coordinated by Drs. Mark Freedman and Harry Atkins at the Ottawa General Hospital. The new discovery, made in a subset of patients participating in the clinical trial, was based on immunological studies carried out jointly in laboratories at The Neuro and the Université de Montréal. Results of this study not only show the clinical benefits of BMT treatment, but also open a unique window into the immunological mechanisms underlying relapses in MS. Th17 cells could be the immune cells associated with the initiation of new relapsing disease activity in this group of patients with aggressive MS. This finding deepens our understanding of MS and could guide the development of personalized medicine with a more favourable risk/benefit profile.

Among the patients treated in the Canadian MS BMT clinical trial, was Dr. Alexander Normandin, a family doctor, who was a third- year McGill medical student getting ready for his surgery exams when he first learned he had MS, “I was so engrossed in my studies that I didn’t pay attention to the first sign but within a few days of waking up with a numb temple, my face felt frozen. I learned that I had a very aggressive form of MS and would probably be in a wheelchair within a year. It was a brutal blow. I became patient #19 – of only 24 for this experimental treatment. My immune system was knocked out and then rebooted with my stem cells. Today, my MS has stabilized. I now have this disease under control and I take it one day at a time.”

Both the clinical and biological studies were supported by the Research Foundation of the Multiple Sclerosis Society of Canada.  Link to study: http://onlinelibrary.wiley.com/doi/10.1002/ana.23784/abstract

MS is a disorder of the brain and spinal cord that causes fatigue, disequilibrium, sensory problems and muscle paralysis.  The cause of MS is unknown, but evidence suggests that it is an auto-immune disease that destroys myelin, a substance coating axons, the thin strands that carry signals between brain cells.It usually strikes between the ages of 15 and 40 but can begin as early as age two.  Women have twice the probability of developing MS than men.  Canada has one of the world’s highest national rates – about 1,100 new cases each year.  Some 50,000 Canadians have MS.  More than 1 in 5 lives in Quebec. The most common form of MS is relapsing-remitting, in which acute symptoms alternate with periods of remission.  Primary progressive MS, the least common form, develops continually without remission.  Secondary progressive MS begins as relapsing-remitting, then becomes steadily progressive.

The Neuro
The Montreal Neurological Institute and Hospital — The Neuro, is a unique academic medical centre dedicated to neuroscience. Founded in 1934 by the renowned Dr. Wilder Penfield, The Neuro is recognized internationally for integrating research, compassionate patient care and advanced training, all key to advances in science and medicine. The Neuro is a research and teaching institute of McGill University and forms the basis for the Neuroscience Mission of the McGill University Health Centre.  Neuro researchers are world leaders in cellular and molecular neuroscience, brain imaging, cognitive neuroscience and the study and treatment of epilepsy, multiple sclerosis and neuromuscular disorders. For more information, visit theneuro.com.