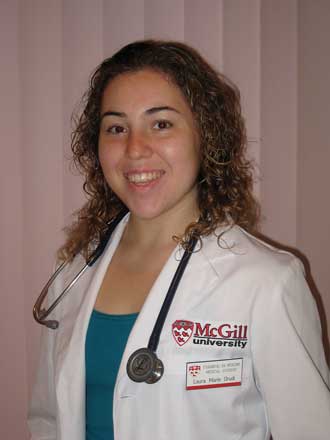 The QMA had the great honour on April 20, 2013, of recognizing and awarding three physicians and four students who have distinguished themselves through their leadership and contribution to improve health care services.

Laura Marie Drudi, a 4th year Medical Student in the Faculty of Medicine was awarded a 2013 Scholarship from the Quebec Medical Association.

Upon realizing that the undergraduate program did not devote much time to vascular surgery, Ms. Drudi became actively involved in promoting this specialty, especially since the demand in this field has been rising as the population ages and more people are dealing with cardiovascular problems.

She also created the Vascular Surgery Interest Group toolkit that is distributed in all the faculties of medicine in Canada and the US.

In addition, Ms. Drudi is an active participant in the events of the Society of Vascular Surgery, which allows her to network with vascular surgery professors and industry representatives. As such, she is collaborating in designing a teaching program for medical students and residents. The program will be presented at the Vascular Annual Meeting to be held in San Francisco in May.