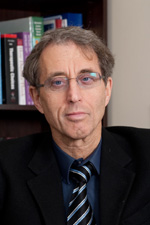 Before becoming Herzl’s leader in 1996, Dr. Malus had a distinguished career outside the mainsteam. He earned his medical degree from McGill in 1964, and in the early 1970s became a medical officer in the Dogrib Indian village of Fort Rae, Northwest Territories. In the mid-1970s, he was a medical officer in Mescalero, an Apache reservation in New Mexico. Finally, he returned to the rural Eastern Townships as a family practitioner, as well as working as a staff physician at Sherbrooke Hospital and Hôtel Dieu Hospital.

After joining the JGH in 1982, Dr. Malus opened and directed Herzl’s Adolescent Unit, an outreach program in which doctors and residents meet with students for classroom discussions on all aspects of adolescence.

Under his supervision Herzl has grown and flourished by providing significant input into the creation of a JGH Division of Palliative Care in 2000; opening the Goldfarb Breastfeeding Clinic in 2002; and inaugurating a Pediatric Primary Care Centre in 2004.

Perhaps most significantly, Dr. Malus was instrumental in the 2010 launch of the Herzl CRIU Walk-in Centre, where medical help is available without an appointment or referral, 365 days a year. Since opening, the Centre has seen tens of thousands of patients, and it has provided—or has helped to provide—regular medical care for hundreds of Montrealers who did not previously have a family doctor.

The aim of this four-week series is to alert patients to the ways a family doctor can help prevent illness and provide help at every stage of the life cycle, explains Dr. Michael Malus, who is JGH Chief of Family Medicine, Director of the Goldman Herzl Family Practice Centre, and the kick-off speaker this year. The lectures—mixing education with entertaining insights in down-to-earth language—will touch on all aspects of family medicine: how to prevent illness, manage medications more effectively, help your teen through difficult times, and be more effective at navigating the home-care system.

“Though graduates of the JGH Mini-Med School will not be eligible to actually practice medicine, the hope is that they will be better-informed patients who are better able to take control of their health,” says Glenn J. Nashen, JGH Director of Public Affairs and Communications. “The Goldman Herzl Family Practice Centre has just celebrated its 100th anniversary, so we felt that this was the perfect opportunity to share with the public all of the latest advancements in family medicine, and how the public can have a direct impact on long-term health care.”

The lectures will take place on four consecutive Wednesday evenings, beginning May 22, and climaxing with the final lecture on “graduation” night on on June 12.