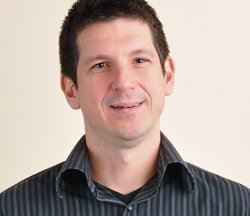 A team of researchers led by Dr. Michel Cayouette at the IRCM made an important discovery, published online yesterday by the scientific journal Developmental Cell, that could better explain some inherited forms of hearing loss in humans. The Montréal scientists identified a group of proteins crucial for shaping the cellular organ responsible for detecting sounds.

For a human to hear, sound-induced vibrations in the inner ear must first be transformed into electrical impulses before they can be relayed to the brain. This transformation is performed by “hair cells” (or sensory cells) located in the inner ear. On the surface of these cells, microscopic hair-like protrusions known as stereocilia act as specialized sensors to detect vibrations.

“During embryonic development, these stereocilia develop into a characteristic V-shaped brush,” says Dr. Cayouette, Director of the Cellular Neurobiology research unit at the IRCM. “In addition, all cells orient their brush with the V pointing in the same direction. This polarized organization is critical for sensory function, but remains poorly understood.”

“We studied a group of proteins known to control cell division in the organism and discovered a new role they play in the auditory system,” explains Dr. Basile Tarchini, postdoctoral fellow in Dr. Cayouette’s laboratory and first author of the study. “We showed that these proteins occupy a specific region at the cell surface to define the exact placement of stereocilia and enable the creation of the V-shaped brush.”

“Furthermore, we discovered that one of the proteins is also required for coordinating the orientation of the brushes among neighbouring cells, thereby ensuring that the V formed by each brush points in the same direction,” adds Dr. Tarchini. “Our results strongly suggest, for the first time, that this group of proteins could be the link between two important molecular mechanisms: the system responsible for the placement of stereocilia into a V-shaped brush at the cell surface, and the system that orients this V-shaped structure in the surrounding tissue.”

“Recent studies show that mutations in one of the proteins we studied are associated with inherited forms of hearing loss in humans,” concludes Dr. Cayouette. “By defining a function for this class of proteins in hair cells, our work helps explain the mechanisms that could cause these conditions.”

This research project was funded by the Canadian Institutes of Health Research (CIHR), as well as Dr. Tarchini’s postdoctoral award from the Human Frontier Science Program. For more information, please refer to the article summary published online by Developmental Cell: http://www.cell.com/developmental-cell/abstract/S1534-5807(13)00537-6.

About Michel Cayouette
Michel Cayouette obtained a PhD in neurobiology from Université Laval. He is Associate IRCM Research Professor and Director of the Cellular Neurobiology research unit. Dr. Cayouette is an associate research professor in the Department of Medicine (accreditation in molecular biology) at Université de Montréal. He is also Adjunct Professor in the Department of Medicine (Division of Experimental Medicine) and the Department of Anatomy and Cell Biology at McGill University. He is a member of the Vision Research Network (Fonds de recherche du Québec – Santé) and the Centre of Excellence in Neuroscience of Université de Montréal. Dr. Cayouette is a Research Scholar from the Fonds de recherche du Québec – Santé. For more information, visit www.ircm.qc.ca/cayouette.