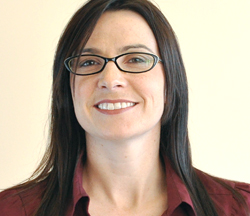 A Montréal research team led by Jennifer Estall (Adjunct Professor in the Department of Medicine (Division of Experimental Medicine) and the Department of Anatomy and Cell Biology at McGill University) at the IRCM discovered that a protein found in muscle tissue may contribute to the development of type 2 diabetes later in life. The study’s results, published in today’s printed edition of the scientific journal American Journal of Physiology – Endocrinology and Metabolism, indicate that the protein could be a promising early predictor of increased diabetes risk.

“My team and I studied PGC-1α, a protein responsible for regulating the production of energy in cells,” explains Dr. Estall, Director of the Molecular Mechanisms of Diabetes research unit at the IRCM. “Surprisingly, we found that young mice lacking this protein in their muscle tissue appeared healthier, as they had lower blood sugar levels before and after meals. So, at first, we thought having less of this protein was actually better.”

“However, as they aged, the mice lacking the PGC-1α protein developed significant glucose intolerance and insulin resistance, which are hallmarks of type 2 diabetes,” adds Dr. Estall. “As a result, we discovered that chronically low levels of this protein in muscle may contribute to the development of diabetes later in life.”