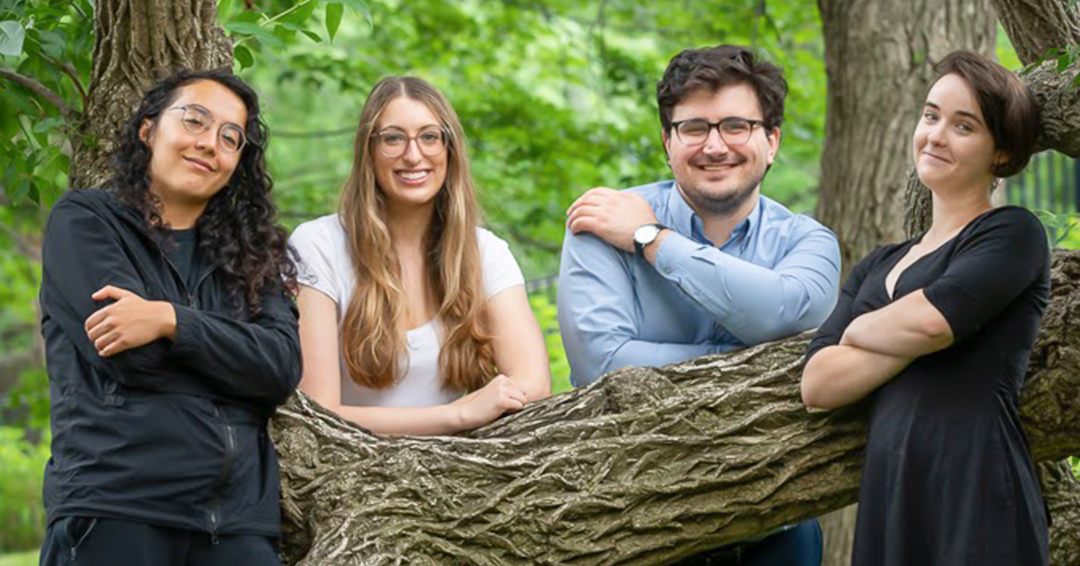 Aifred Health, a young start-up that is exploring ways to improve the treatment of depression, recently received a million-dollar vote of confidence, courtesy of the international IBM Watson AI XPRIZE competition.

Created by four McGill graduates, Aifred Health earned the US$1 million prize by finishing in second place in the AI XPRIZE’s five-year competition. More than 150 teams from around the world took part, each of them developing their own unique approach to using artificial intelligence (AI) technologies to help solve societal challenges.

David Benrimoh, MDCM’16, Kelly Perlman, BSc’18, Sonia Israel, BSc’18, and Robert Fratila, BSc’18, who studied together at McGill, founded Aifred Health. The company is behind an app that uses AI to mitigate the challenges of matching the right medication to the varying symptoms of clinical depression.

The difficulty in finding effective pharmaceutical treatments for depression is widely known among mental health experts. Studies have shown that nearly 70 per cent of patients don’t find relief after their first treatment, while 30 per cent still won’t find it by their fourth. “We have a maxim, that a good candidate in psychology is someone who’s good with uncertainty. It’s built into our profession,” says Benrimoh, now a McGill psychiatric resident at the Douglas Mental Heath Institute. He brings up the case of Frank (not his real name), who he met early in his training, to illustrate the problem.

For nine years, Frank found no joy. His doctors tried various medications to no avail. “It was a very severe depression. He was emotionally unavailable to his family and was unable to continue to run his business,” says Benrimoh, adding that he was struck by how elusive finding the right medication to alleviate depression could be.

But the doggedness of his doctors in matching Frank’s symptoms with the appropriate psychiatric drugs did eventually come to fruition, and Frank began to return to his previous life. “He was able to sleep and enjoy time with his family—and he could smile. He became positive for the first time in a long time.”

Stories like Frank’s are now at the heart of Aifred Health, says Perlman, currently pursuing a PhD in neuroscience at McGill. Many of the members of Aifred Health’s team have personally experienced or witnessed a close friend or family member go through a similar type of experience. Team members are determined to improve the process for finding effective treatments for people struggling with depression from the current trial and error approach. “This type of inefficiency [in] psychiatry really made us think,” says Perlman.

The Aifred Health team knew that AI had already helped advance areas such as oncology, radiology and dermatology by coming up with far quicker methods for combing through huge amounts of data. “So, we decided to use AI for depression because here is a complex series of data and we needed a solution that handled complexities,” says Perlman.

The Aifred app uses AI to help doctors create personalized treatment methods for patients. It employs a series of weekly standardized questionnaires and aligns them with outcomes from more than 10,000 clinical studies to make prescribing psychiatric treatment for the clinician more science and less art.

Perlman says an app that is tailored to individual patients allows them to feel more involved in their treatment and helps the doctor monitor each patient more clearly. Benrimoh adds that it saves the physician time and simplifies the job of taking in all the outcomes: “This app could be an immediate source of information without the need to look through textbooks or pdfs.”

Aifred has profited from the ecosystem that has been developed at McGill to support innovative start-ups created by members of the University’s community. “We would not have made it to where we are without McGill’s support,” says Perlman.

The team benefited from a free 12-week technology incubator program jointly run by McGill’s Faculty of Medicine and the École de technologie supérieure. In 2018, Aifred Health took second place at the inaugural McGill Clinical Innovation Competition and Hakim Family Prize for Clinical Innovation in Health Care. That resulted in some pivotal early funding support, along with the opportunity to collaborate with McGill’s Steinberg Centre for Simulation and Interactive Learning on ease-of-use pre-clinical trials for the Aifred app. The Aifred team also took advantage of McGill’s Building 21, a support system created to help nurture unconventional ideas.

Benrimoh and Perlman both say that the AI XPRIZE process was rigorous, involving five years of annual reporting of statistics and outcomes. “This was beyond peer review!” says Benrimoh. When they received a US$35,000 prize in 2019 for landing on the prize’s short list, the Aifred team was able to leverage its newfound recognition and bring on more investors (the company announced $4 million in new seed financing last December) and personnel.

Perlman says every new request from the AI XPRIZE organizers required the hiring of new talent. “In the end, we managed to gather all these people who had the expertise that we didn’t,” she says, giving the example of new staffers with regulatory experience joining them in helping prepare for a clinical trial. “We were trying to get the best people in every area for the project.”

Aifred plans to use its US$1 million prize money for a 300-350-patient trial and hopes from there to proceed to regulatory approval. Perlman says the company could use its approach to move beyond the realm of depression treatments. “At that point we can continue with our innovation and expand to other conditions, like anxiety, schizophrenia and bipolar disorder.”