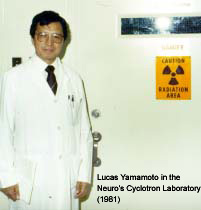 Yazokazu Lucas Yamamoto, M.D., Ph.D., was internationally recognized for his research in nuclear medicine and in the pathophysiology of brain disorders. It was one of nature’s ironies that Lucas passed away from a stroke, the very ailment he had researched for more than three decades.

Born on the 19 January 1928 at Shibetzu-shi, Hokkaido, Japan, Lucas completed his medical course in 1952 at Hokkaido University Medical School. He studied neurosurgery in Washington, DC, at Georgetown Medical Center and neuropathology at the Armed Forces Institute of Pathology under Dr Webb Haymaker, a former Fellow of the Montreal Neurological Institute. From 1958 to 1961 at the Medical Research Center of Brookhaven National Laboratory, Long Island, NY, Lucas participated in the neutron-capture project to treat brain tumors, research for which he won his PhD in Radiobiology from Yokohama University, Japan.

In 1961 Lucas was recruited to the MNI where his expertise in nuclear medicine and neurosurgery added great strength to the brain-scanning program under way in the Cone Laboratory for Neurosurgical Research. Continuing summer stints at Brookhaven, he helped to develop the first cerebral blood flow studies by positron emitters using an instrument of 32 sodium iodide detectors, a system later transferred to the MNI and modified to produce in 1976 the first tomographic PET scans of a glioma and an infarct.

With the group in the Cone Laboratory, Lucas was a key figure in developing PET with a Germanium-68 generator and Krypton-77 uniquely produced by the physicists and radiochemists at McGill’s synchrocyclotron. In 1978 the first PET scanner using Bismuth-Germanate crystal detectors was designed, constructed and tested by Christopher Thompson, Lucas Yamamoto and Ernst Meyer; it became the prototype for many successive commercial scanners. In 1981 Lucas’ energy and enthusiasm played a major role in the acquisition of the first “baby cyclotron” outside Japan; this produced a range of positron emitters for PET studies on brain tumors, epilepsy, Alzheimer’s and Parkinson’s disease and stroke, as well as exciting research on cerebral localization by the neuropsychologists at the MNI.

Lucas also devised experimental models of cerebrovascular disorders to elucidate focal ischemia, hyperemia, vasospasm, cerebral edema, and the possible role of retrograde venous perfusion in treating acute cerebral ishemia. He was involved in the development of fluorescein angiography of the brain both for experimental use and for application in the operating room to treat cerebrovascular malformations. His research resulted in over 300 scientific reports.

Lucas became Assistant Professor in 1968 and Professor in 1980 in the Department of Neurology and Neurosurgery at McGill, Director of the Neuroisotope Laboratory for Brain Scanning at the MNH from 1973, and Co-Director of the Cone Laboratory for Neurosurgical Research at the MNI in 1984. He trained more than seventy research fellows from Japan; he not only supervised their professional work but gave them and their families much moral support during their stay in Canada. The annual “pool party” arranged by Lucas and his wife Jeanine for the staff of the research laboratories became legendary. Lucas will be fondly remembered by many of his colleagues and students as a scholar, physician and friend.