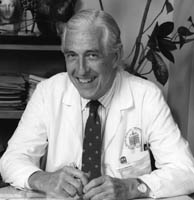 JOSEPH GRAHAM STRATFORD, BSc’45, MDCM’47, MSc’51, DIPMED’54, an eminent neurosurgeon, passed away on July 22 while vacationing in France. After having trained with legendary Montreal Neurological Institute founder Wilder Penfield, Stratford taught at the University of Saskatchewan before returning to McGill. As the head of the Montreal General Hospital’s neurosurgery division in 1966, Stratford helped create a 30-bed neurological and neurosurgical ward with a dedicated intensive care unit — a first in Canada. In 1985, he played a leading role in the creation of the McGill-MGH Pain Centre, taking on the position of medical director. He received the MGH Award of Merit in 2000 in recognition of the important role he had played at McGill and the Montreal General for many years. Following his death, his friends and relatives created the Dr. Joe Stratford Memorial Fund in his honour. All funds benefit the MUHC Pain Centre, and those wishing to donate may do so through McGill’s Faculty of Medicine (contact: 514-398-5000 or by email ).