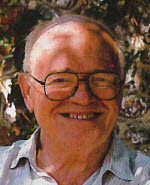 We regret to announce that Professor JC McDonald passed away peacefully in Montréal on April 25th 2016, at the age of 98 years.

Dr. McDonald led an eclectic research career making notable contributions in the area of asbestos and health and in health services research among many other areas.  He played a major role in modernizing the Québec Public Health System in the early 1970s through his contribution to the Castonguay Commission.

Our thoughts and prayers are with Dr. McDonald’s family and friends.