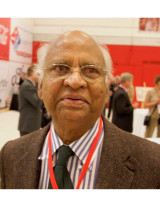 Our friend and colleague Zafer Ali-Khan was many things to many people both at McGill and around the world. He devoured the news media both in print and video and was the only person I knew who read Al Jazeera on a regular basis. As a consequence, he could speak knowledgeably on the political problems and situations of peoples and countries around the world, and next door. In the years since his retirement, we would meet for a Friday breakfast as often as possible and the conversation would always gravitate to unusual current affairs. I am sure he would find the current political situation in the country to our south very amusing.

Following a Masters in Parasitology from the University of Karachi, Pakistan, a PhD from Tulane in New Orleans, and post-doc from UCLA, Zafer Ali-Khan became an outstanding expert in the field of parasitology. Following his arrival at McGill, he was often consulted by several Montreal Hospitals for his opinion on the biopsies and specimens taken from patients presenting with unusual lesions. From 1972 – 78, he was Director of the Clinical Parasitology Unit at Royal Victoria Hospital. His research focused on amyloidosis, a chronic and often fatal disease in which a variety of chronic inflammatory responses caused the defective folding and accumulation of insoluble deposits of amyloid protein fibrils in otherwise healthy tissues, disrupting their normal function. Amyloid deposits in the kidney interfere with kidney function and other affected target organs include the heart, and possibly the brain. Zafer discovered that some chronic parasitic diseases can trigger the partial alteration of amyloid precursors and the misfolding that accelerates amyloid deposition. Using the parasite Ehinococcus multilocularis, he developed a mouse model for exploring amyloid production, its deposition and the pathological consequences of amyloidosis. In recent years, he noted a similarity between some of the tissue changes in his model with those seen in Alzheimer’s Disease. He was a passionate researcher, following his vision to gain insight into the pathogenesis and possible means of preventing amyloidosis and related diseases, and trained many students in the art of research. He published over 65 articles while at McGill with his students in Parasitology, Immunology and Pathology journals, and contributed chapters in a number of scholarly books in his areas of interest. He was much appreciated and played a key role in enhancing the lives of many graduate students through his role as Chair of the Graduate Committee, a position he held for 10 years from 2000 – 2010.

A committed parent, Zafer is survived by two daughters, Sarah and Natasha from his marriage to Felicity Cutten, who was a professor of Etymology at McGill’s MacDonald Campus. Sarah has a BSc in Biochemistry and a PhD in Pharmacology and Therapeutics, and was simultaneously one of the most successful track athletes of all time at McGill. Sarah was admitted to the McGill Sports Hall of Fame in 2013. Sarah lives with her partner Marty and son Hudson in Montreal and works in the Centre for Intellectual Property Policy, at McGill’s Faculty of Law on public policies regarding patents and Open Science in biotechnology research. Natasha has a Masters in Urban Planning also from McGill and now lives in Seattle with her husband Wayne and her daughters Willow and Reese. Zafer loved his family and visited them as often as possible.

On the lighter side, Zafer admitted to being navigationally challenged and frequently lost his way to meetings and parties. When we invited him to our summer party, I provided Zaf with a map of the route from his house to ours highlighted in fluorescent yellow, with our phone number on fluorescent red at the top and the date and time at the bottom. Even then, the chances that he could follow the route were about 50%, even though he had visited several times over the years. His explanation of this difficulty was simple. His home in India was such a beautiful place; he had no need to travel to any other place and never learned the arts of navigation. As proof, he asked me if I knew of any explorers or international navigators of Indian origin. I admitted I could not recall any, and Zaf replied, “That is because there were none.” As a consequence, on his daily drive to McGill, he used the only route he knew, refusing any suggestions of alternate routes to avoid traffic jams. He would not have enjoyed the traffic diversions we now deal with daily in Montreal.

Zaf always loved cars and he was a lucky driver. He drove Fred and I home from McGill one evening in early winter and when we reached the highway 13 overpass on highway 20 it was sheer ice, and cars ahead of us were sliding all over the road. Understandably, Zaf jumped on his brakes and we were soon skidding all over the road like the others. Fred and I yelled “No braking” and surprisingly Zaf complied and was able to regain control, but we were still doing about 80 on sheer ice. Two cars just ahead ran into each other nose to nose and, expecting an impact, I ducked down in the back seat and Fred squeezed to the floor in the front seat fearing the worst. Just as we were about to hammer the cars, they both rebounded from their impact with each other and we shot through the gap between with only millimeters to spare. That was the closest I have ever been to a serious accident, and Zaf pulled us through without a scratch. Zafer is also the only person I knew that owned a 1957 Ford Thunderbird (like the one in the movie American Graffiti). He told me he loved that car and liked to drive it fast, and that would be the way I would like to remember Zaf, out cruising in that iconic ‘57 T-bird driving into the sunset and not caring where he was going as long as it was somewhere beautiful that he could share with his family.