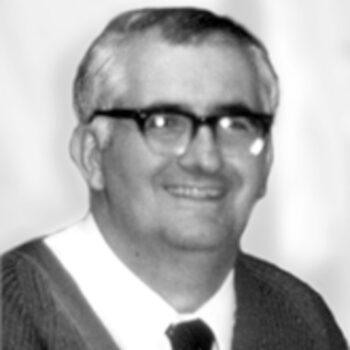 Dr. Bob Williams, of Montreal, Que., died in Montreal General Hospital after a courageous 34 years as a quadriplegic. He is greatly missed by his son, Ian, (Diane); and daughter, Jennifer, (Bruce); sisters, Susan Williams and Jane Jackson; nieces and nephews; and grandchildren, Madeline, Jack and Lila.

Bob grew up in Harriston, Ontario, the son of the late, Dr. J.C. and Janet Williams, where he was first introduced to medicine through observing his father’s country practice. After completing his MD at Queen’s in 1962, he did a residency at the Montreal General Hospital, a PhD in physiology and post-doctoral research at St. Mary’s Hospital in London, England. He was a fellow at the Cardiovascular Research Institute, University of California, San Francisco in the early 70s and had returned to Canada with his young family and was establishing his research at McGill and clinical practice at the Children’s Hospital when he was suddenly incapacitated by an infection.

Through incredible tenacity he made a new life for himself as a quadriplegic, including retraining in an entirely new specialization, radiology, for which he was certified five years after his illness struck. The support of his friends and employers made this difficult transition possible. While hands-on diagnostic procedures and primary research were now beyond him, he was a willing consultant and co-investigator whose name is on many publications. Over the course of his career he held appointments (often simultaneously) within the departments of Physiology, Pediatrics and Radiology at McGill. He was medical registrar at the Children’s from 1977-2002 and retired in 2006 having received a number of awards for his teaching of medical students and residents.

Bob will be remembered for his dry sense of humour, his intellectual curiosity, his astonishing memory, his positive outlook and his generosity. The loving father that Bob managed so consistently to be to his family belied the daily struggles he endured, with much assistance. A celebration of his life and indomitable spirit was held on Friday, May 8, 2009 at the Atwater Club, Montreal, Que.