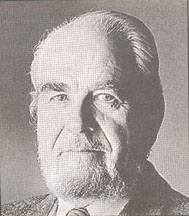 We mourn our dear friend and colleague, Pierre Gloor, whose life for 50 years was closely identified with the Montreal Neurological Hospital and Institute, the last nine years unfortunately as a patient, following a severe stroke. This left him aphasic, but still well able to recognize and interact with his family and friends.

Pierre was born in Basel, Switzerland and started his career in neuroscience with Professor Boranger in Colmar, France before coming to McGill. During his training with Penfield and Jasper in the early 1950’s, he developed a lifelong passion for clinical neurophysiology, EEG and, in particular, epilepsy.

His interest in clinical neurology and epilepsy led him to take the certification examination in neurology at a mature age. It was given to me to be the examiner of my master and teacher and I will never forget his wonderful ability to discuss a patient with varied and impossible diagnostic difficulties. Pierre had a life long interest and admiration for the work of Hans Berger, the discoverer of electroencephalography. He translated Berger’s papers with great care to render the complexities of Berger’s sentences, with the proverbial verb at the end of a long paragraph. He was as much concerned by the legacy and personality of the man as by his work on the electroencephalogram.

He was a consummate researcher, a wonderful teacher and he had extraordinary clinical judgment and powers of observation. Pierre was a prodigious worker and, upon his retirement from administration, it took three people to shoulder his workload. He was one of the great epileptologists of our time. Laden with honors and admired by his many disciples, he received the Epilepsy Research Award of the American Epilepsy Society, the Michael Prize from West Germany, the Robert Bing Prize of the Swiss Academy of Medical Sciences, the William Lennox Award of the American Epilepsy Society and the Penfield Award of the Canadian League Against Epilepsy. He was the President of the Canadian and the American Electroencephalographic Societies, The Eastern Association of Electroencephalographers, and of the American Epilepsy Society. Lectureships in his honor were founded by the American EEG Society, the Eastern Association of Electroencephalographers, and by the University of Chicago.

Pierre had inexhaustible scholarly curiosity and planned a comprehensive synthesis of all that is known about the temporal lobe and the limbic system, a subject which continually fascinated him. He did this in his usual thorough manner, involving many trips to the original Yakovlev anatomical archives in Washington. This resulted in his magnum opus, “The Temporal Lobe and The Limbic System”, published by Oxford University Press. The final critique of this subject was unfortunately not given to him to complete, but the volume appeared under the stewardship of William Feindel and many of Pierre’s friends. It will stand as a tribute to him for many years.

He and his wife Luba Genush were marvelous hosts and as a true Swiss, he adored cheese. An accomplished musician and an avid cross-country skier, he often outdistanced his much younger colleagues. He was sensitive and generous to his employees and always helped with any of their personal problems. His devotion to his wife and children, Irene (Schatzy) and Danny was admirable.

Pierre was indeed a star in the crown of McGill and of international Neurophysiology and Epileptology. He will always be remembered as a great pioneer and a wonderful friend.