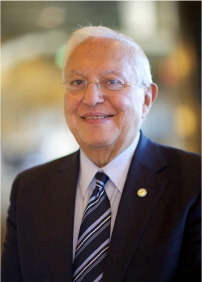 It is with sadness that we share the news that Dr. Mostafa Elhilali died suddenly in Florida on Saturday, April 29th. True to his legendary passion for the field of urology, he was attending the American Association of Genitourinary Surgeons Meeting at the time of his death.

Born in Egypt, Dr. Elhilali chose his career path at the age of 15, encouraged by his father and uncle. In 1959, he obtained his medical degree at the University of Cairo. Thereafter, he trained under talented pioneers in Egyptian urology. This is where he truly fell in love with this specialty. As a research fellow, he travelled to Canada to complete his Ph.D. at McGill University. He became certified in urology by the Royal College of Physicians and Surgeons of Canada and was appointed Chair of Urology at the Centre hospitalier universitaire de Sherbrooke.

Ultimately, Dr. Elhilali’s legacy is a reflection of the breadth and depth of esteem in which we was held by his peers locally, nationally and internationally; by the students he taught and mentored with conviction and joy; by the administrative leaders with whom he embraced challenges while encouraging excellence, innovation and collaboration at all times; and by the many patients to whom he was so devoted. Examples of innovations  that are part of his legacy to our hospitals include steering us to be among the first in Canada to introduce and remain a leader in endourology; helping introduce neuromodulation technology to the world; and laser prostatectomy.

An exceptional leader, Dr. Elhilali was made an Officer of the Order of Canada and Ordre national du Québec. Other honours include Lifetime Achievement awards from the AUA, CUA, QUA, and SIU, as well as the Founder’s Award from the Kidney Foundation of Canada and the Gold Medal from the Egyptian Urological Association. In 2011, the Mostafa Elhilali Visiting Professorship in Endourology and Minimally Invasive Urology was created at McGill and the Elhilali-Azrielei Chair in Urology has been established to perpetuate his influence in the field to which he was so devoted.

A family man, philanthropist, colleague and friend, Dr. Mostafa Elhilali inspired countless people to reach for the top of their fields. Our deepest condolences go out to his family and friends around the world; he will be sorely missed.