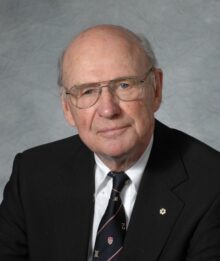 It is with great sadness that we inform you that Dr. Lloyd Douglas MacLean passed away peacefully on the morning of January 14, 2015 at the age of 90.

“LD”, as he was affectionately known to colleagues and friends, was born on June 15, 1924 to Wilfred and Azilda MacLean in Calgary, Alberta. He graduated medical school from the University of Alberta in 1949 and went on to complete his surgical training at the University of Minnesota, under the mentorship of Dr. Owen Wagensteen.

Dr. MacLean made significant contributions to the study of shock, peritonitis, host resistance, transplantation and the development of surgery for obesity. Throughout his career he remained a passionate advocate for the advancement of patient care and the promotion of excellence in academic surgery.

He was a member of numerous surgical societies and held officer roles in many, including President of both the American Surgical Association (1992) and the American College of Surgeons (1993). He received many honours including The Gairdner Wightman Award (1989) for his outstanding contributions to Canadian medicine as a surgeon, scientist, teacher and administrator. He was appointed an Officer in the Order of Canada in 1985 in recognition of his considerable contributions to the field of Medicine.

A loving husband and a devoted father, Lloyd shared generously of his broad interests in golf, tennis, skiing, hiking, gardening, cycling, and life-long learning. He will most be missed for his unbounded sense of humour. His lifelong documentation of his family in pictures earned him the moniker “Foto” from his grandchildren.

A memorial service celebrating Lloyd’s life will be held at a later date. In lieu of flowers, the family respectfully requests that those wishing to make a donation contribute to the charity of their choice. For those wishing to contribute to the Lloyd D. MacLean Awards for advancement of the McGill Department of Surgery, please contact Joanne Marie Kotjila at 514-398-2919

Our thoughts and prayers are with Dr. MacLean’s family at this time.